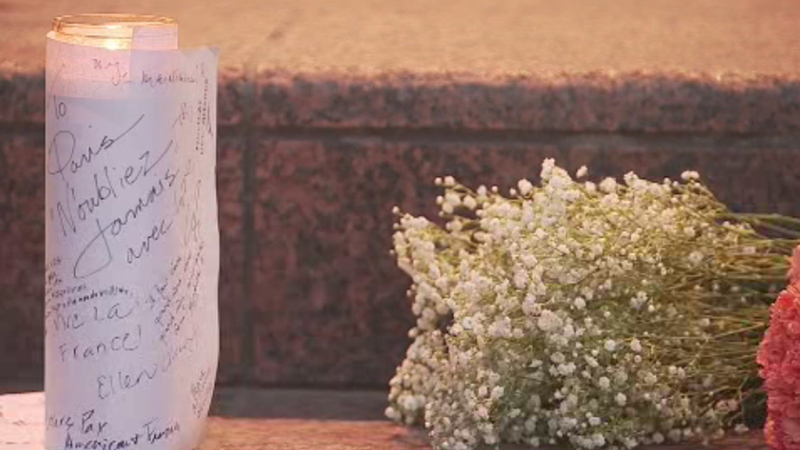 HOUSTON (KTRK) -- Outside a Galleria-area office building, a collection of flowers and candles filled granite steps leading up to glass doors. Among the building tenants, is the office of the French Consulate General in Houston.

The consulate has yet to issue a statement about Friday's horrific terrorist attack in Paris. This afternoon, a small gathering of people stood outside and expressed their concern and fear about what, for some of them, is taking place in their homeland.

Houston is home to a number of French ex-patriates, who are living and working here. Now they feel the distance, far from friends and family in France.

Jonathan Hensten came to the small vigil with his wife and two year old son, Theodore. "We would like to be closer with our friends. We want to be with them and overcome this together."

They instead lit candles, and wrote messages of support and condolence, left beside bouquets of flowers.

Isabelle Perreau is with the Alliance Francaise, a longtime French cultural organization in Houston. She has family in Paris, and was able to contact them after Friday's attacks.

It is, she believes, more than an attack on France, but on Western Europe. "And the U.S. too," she adds. "I'm sure they want to do something here too. They don't tolerate another way to live, other than the ones they want to impose on everybody."

Paris has long been a place of liberality, but with the second terrorist assault on the city in less than a year, it is affecting that tolerance. "I was always opposed to the death penalty," Perreau says. "Now I don't know."