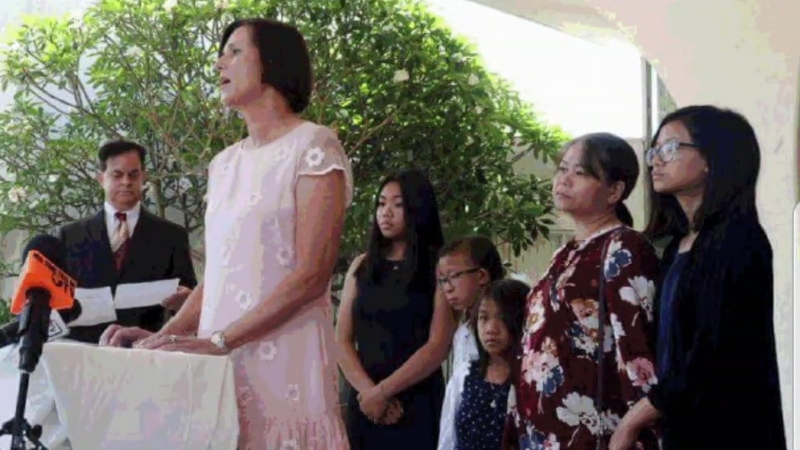 HOUSTON, Texas (KTRK) -- Family members of two men are worried about whether the government of Vietnam is developing a pattern of arresting Americans of Vietnamese descent.

A few weeks ago, Eyewitness News brought you the story of William Nguyen, a Houston native who was arrested after participating in an anti-government protest. He was recently deported back in the United States, and today, spoke in depth about his experience.

"Overwhelming," Nguyen said, as he met with Rep. Jimmy Gomez of California, one of the elected officials who championed his release. "I would say that the prison experience has been as overwhelming as the experience afterwards in the sense of the media attention and the expectations that the Vietnamese community had to carry on the message. I've found both equally difficult to digest."

While William Nguyen was able to make those statements in freedom at a Houston hotel, another American, Michael Nguyen, remains imprisoned in Vietnam.

The two men are not related, but both have family members in Houston.

Michael Nguyen went to Vietnam in late June to visit relatives. Family members say he did not participate in any protests, but was arrested while riding a bus around July 7.

"From what we understand, one of the people with him on the bus was a student and that person had partaken in some protests at a university a few weeks earlier," said Mark Roberts, brother-in-law of Michael. "Michael, went, to the best of our knowledge, only to visit family and see friends."

Roberts said family in California, as well as Michael Nguyen's sisters in Texas, are in contact with lawmakers in both states. They are lobbying for swift action to bring Michael home.

The plight is something William Nguyen can sympathize with. With his own mother looking on, William talked about the desire to help the country of his ancestors, even after being imprisoned.

"For my mother's sake, I'll avoid the country for a couple of years," he said. "I certainly sympathize, I know where he's coming from. I know we, as Vietnamese born overseas or not, have the best interest of the Vietnamese people at heart."

Michael Nguyen's family says as far as it knows, there has not been official charges against their loved one. Meanwhile, his four young daughters are distraught.

"The family is distressed, the girls are very sad," said Roberts. "The girls used to be happy. While they still are to a degree, there's a lot of tears I have never seen."