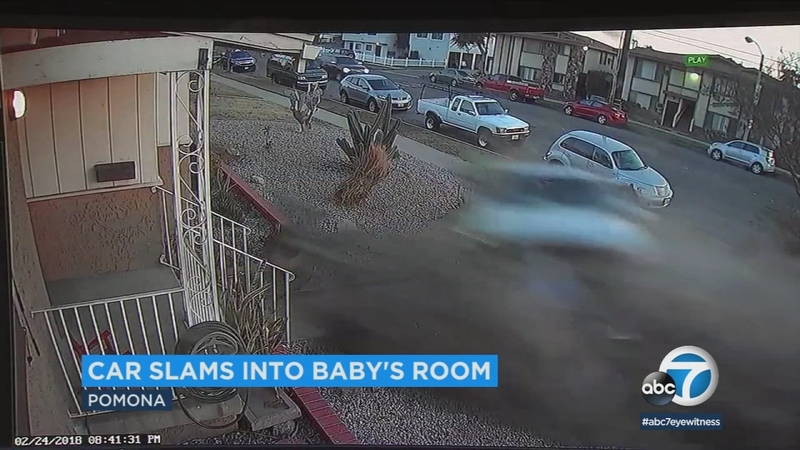 POMONA, California -- A car went flying down a residential street and slammed into a room of a family's home where their toddler son had been just minutes earlier.

Surveillance video captured the vehicle Saturday night hitting a curb, flipping and slamming into the home of Alex and Marie Stubblefield.

It smashed into the room of their 14-month-old son Ace where he had been just a short time earlier. His crib was visible in the debris after the crash.

"I heard the screeching at first and then all of a sudden we felt what felt like a huge earthquake," Marie Stubblefield said.

She called her husband, who was only a few minutes away.

"I can just visualize it in my head, if he was in there," Alex Stubblefield said. "I'm always changing his diaper in there, so is she. I thank the Lord that he wasn't in there."

Alex says police told him the driver wasn't drinking, and the driver and passenger claimed they were going 40 mph.

But he says witnesses saw a different scenario. They believed the driver was street racing and the crash happened after the car swerved to avoid another driver.

The driver and passenger were not seriously injured.

But the Stubblefields say it will have a lasting impact on their family.

The home has been red-tagged, meaning it is unsafe for them to occupy for now.

Even when they rebuild, they say they won't feel safe living there anymore.