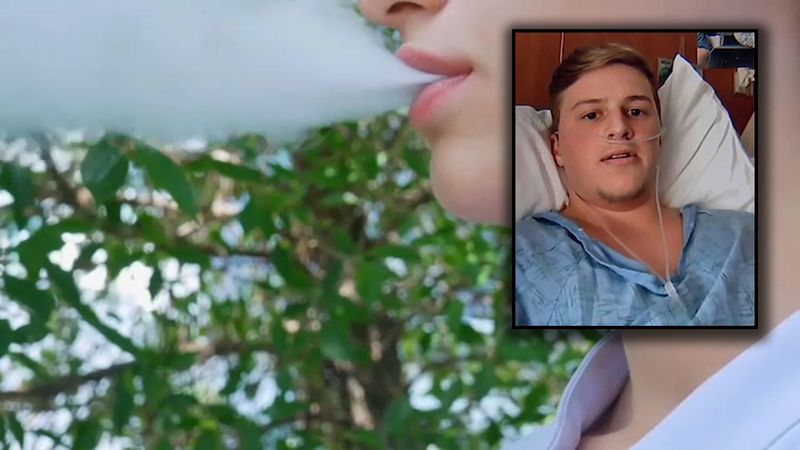 HOUSTON, Texas (KTRK) -- As the CDC investigates a vaping epidemic, a Texas A&M student said he knows the dangers too well after e-cigarettes put him in the ICU.

After a year and a half of vaping, Hunter Sims said he's finally had enough.

Last week, he was rushed to the hospital. After spending days in the ICU, his family feared the worst.

"They were very close to putting him on a ventilator," his mother Dawn Sims recalled. "He was not breathing well on his own. At one point one night, they put lots of ice packs on him to lower the temperature."

In the city of Houston, three cases have been confirmed. In all, more than 450 cases across the country has led the CDC to call this a "vaping epidemic."

"There does not seem to be any antidote, any magic bullets to reverse this," said David Persse of the Houston Health Department. "It's supportive care, getting the patient through the critical period, and letting their body heal itself."

Experts said this could be tied to THC being illegally added to vaping liquid, or vitamin E. They said parents should look for signs of fatigue and cold-like symptoms. They also added vaping is bruising lungs, which is something they've seen before with chemical leaks.

"That's probably the closest thing that I could relate it to," Persse explained. "The difference is, when we have a chemical release, the neighbors and the people nearby who do have problems, they have it pretty quickly. This seems to take several days."
Health experts said around 20 percent of high school seniors have experimented with vaping, which is something Sims wishes he never attempted.

"It's almost every kid," Sims said. "It's an epidemic. It needs to stop. I think the FDA needs to crack down before this gets worse."

E-cigarettes are regulated. The ingredients are tested, and minors can't buy them. In fact, just 10 days ago, the legal age to buy these products went from 18 to 21 years old in Texas.

ABC13's Nick Natario reports on an outbreak of a lung illness stem from apparent e-cigarettes, or vaping.