Most touching moments from Vanessa Guillen memorial in Houston 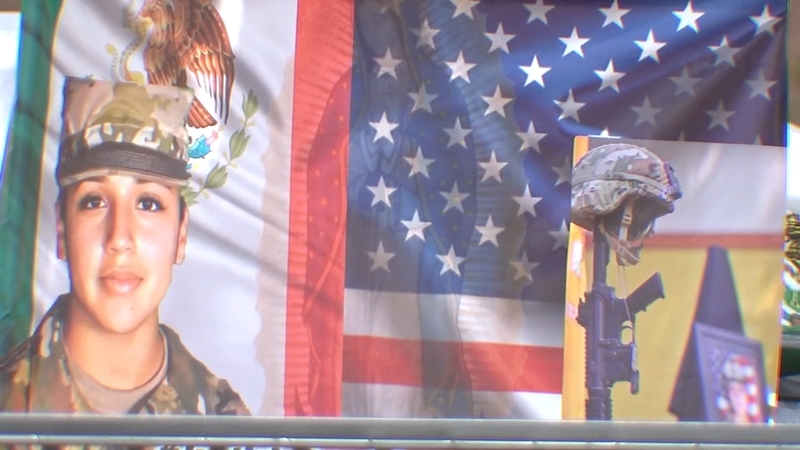 HOUSTON, Texas (KTRK) -- The public was able to pay respects to Vanessa Guillen today at the Houston high school where she was "passionate about making a positive difference in the world."

The Fort Hood soldier's memorial took place at the auditorium of her alma mater Cesar Chavez High School in Houston.

After dozens of cars formed a procession and traveled to Cesar Chavez High School, Vanessa's casket was transferred to a horse drawn carriage.

Vanessa's sister can be seen riding in the carriage in the video below.

Vanessa's family and friends walked a few laps around the soccer field where the soldier once played.

As guests entered the auditorium to pay their respects, they were greeted with a mariachi band playing. The stage for the memorial was also decorated with flowers, balloons, some which spelled out 'Vanessa,' and artwork honoring the soldier.
WATCH: A look inside Vanessa Guillen's public memorial service
EMBED More News Videos

The stage at Cesar Chavez High School is covered in flowers, balloons and artwork honoring the soldier.

During the memorial, Vanessa's sister, Lupe Guillen took the podium to address guests and say a few words about her sister, who she says has given her the strength. She also thanked her mom.

Watch the video above to listen to Vanessa Guillen's sister, Lupe Guillen, give an emotional speech during the memorial.