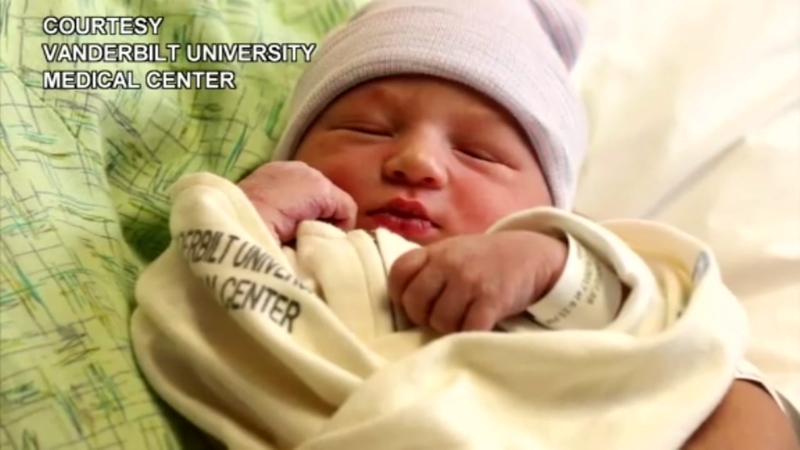 NASHVILLE, Tenn. (KTRK) -- A nurse is being applauded after he delivered a baby in the back seat of a car and saved the baby's life by performing CPR.

Baby Elijah's mom was in labor in the back seat of her car with her crying toddler next to her in the parking lot of Vanderbilt University Medical Center.

Nurse Steven Welton's mother, who also works at the hospital, alerted him of the woman's frantic husband trying to get help. Welton ran to the expectant woman's side.

"It's kind of fuzzy at this point because adrenaline was pumping," Welton told WZTV. "But the baby looked to be about halfway out so I grabbed him, pulled him the rest of the way, and I could see the umbilical cord and everything. No gloves. I'm just out there in it!"

Welton is a trauma nurse, but said he never experienced anything like this.

"I immediately could tell he was blue and not doing anything," Welton said. "He wasn't moving, wasn't crying. I just said I gotta start compressions and held him in my hand and started doing it, about two minutes of solid compressions."

"We were both most concerned about the baby and that the baby be okay," Biesemeier said. "I was praying that it would be okay."

After getting Elijah and mom inside the hospital safely, Welton remembers looking over at Elijah's dad who had been looking for help and returned shortly after all the commotion.

"I'm thinking 'oh my goodness' and he had a smile on his face," Welton said. "I think because he was happy things was getting better, and in my mind I was like 'man you have no idea what just happened.'"

"When you're right there and you're seeing this life on the line and time is going by," Biesemeier said. "It's just immense."

Welton said he went by later to see the family and the new baby he helped deliver.

"I actually visited them in their family waiting room," Welton said. "I got to see the whole family and gave them hugs and said I was happy that they were doing good, and they were very grateful."