Vance Ginn, the chief economist for the Texas Public Policy Foundation, is facing fierce backlash for a recent racist tweet that said schools should open since most of the people dying from coronavirus in Texas are elderly or Hispanic.

The Texas Tribune reports before Monday, the state's racial and ethnic breakdown of deaths had large gaps, with up to 18% of deaths last month recorded as "unknown." A revised count of the data released Monday by the Department of State Health Services, however, shows that Hispanic Texans are overrepresented in the state's updated fatality count.

Citing the revised data, Ginn tweeted that the people most likely to perish from the deadly virus are people older than 50 and Hispanics, whose death rate increased from 24.8% on May 27 to 47.4% on July 27. Hispanics make up about 40% of the state's population.

Meanwhile, about 180 deaths, or 3% of the total, occurred among Texans younger than 40. About 2,000 people who died were 80 or older, making up the largest age bracket of COVID-19 deaths.

"Why not #openschools, end universal mandates, target vulnerable & check those from #Mexico?" Ginn wrote in a since-deleted tweet. He juxtaposed his tweet with a GIF of Prince Harry of Wales miming a mic drop. 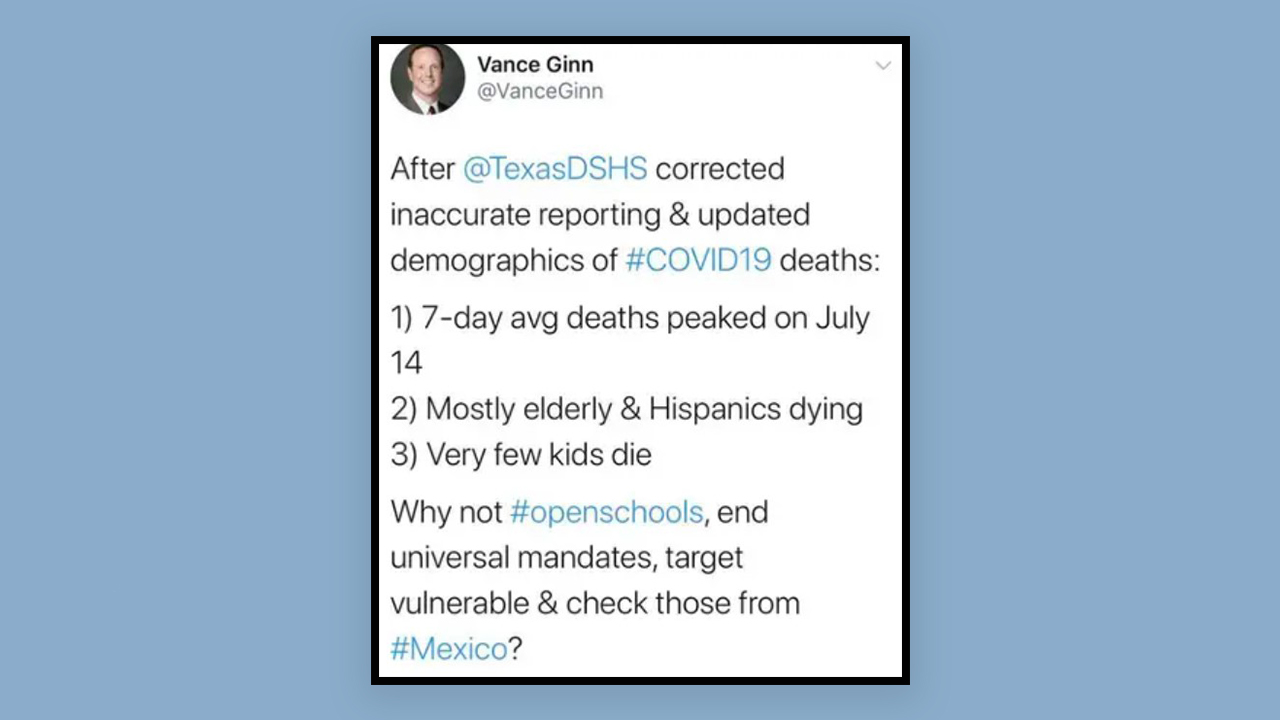 He later apologized for tweeting the GIF. "It's been brought to my attention that the gif may have been perceived as insensitive. I apologize as that was not my intention," he tweeted.

In an interview with The Texas Tribune, Ginn said the intention of his Twitter thread was to outline the more thorough data provided by the state. He also said his tweet with the GIF was "woefully taken out of context out of bad faith."

"What we're really focused in on is, 'How can we best make sure that Texans are taken care of during this time?'" he said. Given the revised data that shows demographic breakdowns, he questioned whether state and local officials should take a more "targeted approach" to combatting the virus, rather than passing blanket policies.

I apologize for how I poorly communicated as I believe strongly based on my deep faith that every life is precious. My intent was to highlight the positive development of more data available to make better policy decisions and help the vulnerable.

Ginn later removed the tweet and apologized. "I believe strongly based on my deep faith that every life is precious," he wrote. "My intent was to highlight the positive development of more data available to make better policy decisions and help the vulnerable."

Almost 53% of public school students were Hispanic in 2018-19 and more than 60% are economically disadvantaged, according to Texas Education Agency data. Public health experts have said schools that reopen in areas with high and fast-rising rates of community spread are likely to exacerbate the effects of the virus. That means staff and students could bring the virus home to their families.

"This is my grandfather Albert. He was an Hispanic citizen of the U.S. & passed from #Covid," tweeted former state Rep. Jason Villalba, R-Dallas. "His grandchildren (born in Dallas) lived with him and also got #Covid. They survived. W/ great respect, the death of elderly Hispanics does not necessarily make the schools safe to open."

Ginn, who previously served in the White House under President Donald Trump's administration as associate director for economic policy at the Office of Management and Budget, also served as senior economist for the think tank.

While children may not be the most vulnerable to contracting the virus, fear of community spread has prompted some large school districts to delay the start of the fall semester for in-person instruction.

In mid-July, Texas education officials said school districts could delay on-campus instructions for at least four weeks and ask for waivers to continue remote instruction for up to four additional weeks in areas hard hit by the coronavirus pandemic. During that time, districts must educate at least a small percentage of students in person and give the state information on what public health conditions would allow them to bring more kids into classrooms.

TEA issued new guidelines for the start of the school year. Press play to learn more.

In recent months, the Republican Party has faced criticisms for appearing to prioritize the economy over public health, while research shows that COVID-19 disproportionally affects Black and Hispanic people.

Gov. Greg Abbott, too, has faced pushback from Democrats on his coronavirus response efforts. Although he implemented a statewide mask mandate earlier this summer, he's been chided for a speedy phased reopening of the economy to which public health experts attribute a record number of coronavirus deaths in the state.

Aliyya Swaby contributed to this report.

Disclosure: Texas Public Policy Foundation has been a financial supporter of The Texas Tribune, a nonprofit, nonpartisan news organization that is funded in part by donations from members, foundations and corporate sponsors. Financial supporters play no role in the Tribune's journalism. Find a complete list of them here. Baylor students must test negative for virus before returning