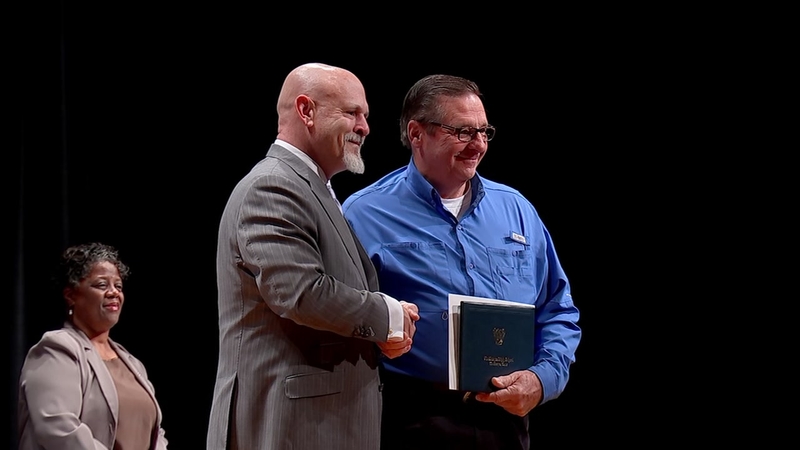 DICKINSON, Texas (KTRK) -- "It's never too late," is what a Vietnam War veteran said on this Veterans Day. Daryl Everett received his high school diploma 45 years after he left La Marque High School as a 17-year-old junior, to join the Navy.

He was assigned to a Navy ship in the Tonkin Gulf escorting the USS Kitty Hawk air carrier, and serving as an evacuation point for American and high-ranking officials fleeing Vietnam during the war.

Everett said that the Navy saved his life in a way, and gave him a purpose. He entered a teenager and returned as a man.

After four years of active duty, he returned stateside and eventually went home to Galveston County. He also found the girl he left behind in high school. Next year, Daryl and Elizabeth Everett will celebrate their 40th anniversary.

Everett enjoyed a career in construction and also worked as an insurance adjustor. The family raised two daughters.

"He always said that we had to do well in school, go to college and find stable careers," said daughter Amy Link. "It wasn't until later that we realized he never got his high school diploma. So his emphasis on our education makes sense now."

Everett had a GED, as a requirement to enlist in the Navy.

"It's not the same though. Sometimes it was an embarrassment to put that down on a job application," he said.

Through the VA and the school district, Everett learned he could receive his diploma.
"I just knew it was a missing milestone for him, and he was always excited for other people's graduations. He didn't get to experience that," said wife Elizabeth.

His wife, daughters, granddaughters and extended family were at the presentation Monday evening. Three other veteran friends who also missed out on graduations received diplomas as well.

He hopes it inspires others to do the same, or avoid leaving school in the first place.

"Get your education, your diploma and degree and don't let outside factors, regardless of how bad they may be, affect you," he said.

Everett is now taking courses at the College of the Mainland. He plans to get his associates degree. Next goal? Perhaps a college diploma.