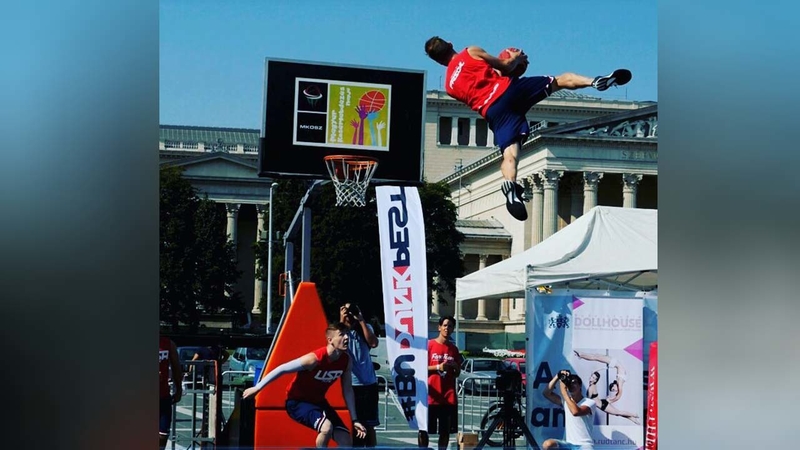 HOUSTON, Texas (KTRK) -- The NBA season isn't in full swing yet, but there's still plenty of hooping and dunking going on in Houston.

The USA Dunk team is preparing to compete in the Freestyle Dunk World Cup, also known as #BuDUNKpest2018 because the event takes place in Budapest, Hungary on Sept. 22.

During the event, teams from all over the globe show off their creativity and skills in acrobatic dunking, break dancing and individual dunking.

Mueller and Smith are from Houston.

"We have some of the best acrobatic freestyle dunkers here in the United States, so when Budapest said we were going to have this tournament, we said we have to compete," Smith said.

Dunkers from both America and Canada will be well represented in Budapest's Heroes' Square. The other members of the team come from cities including Boston, Oakland, Milwaukee, Toronto, Detroit and Orlando.

When they aren't doing high-flying tricks with a basketball, some of them are back home entertaining crowds with the Harlem Globetrotters and performance teams for the Detroit Pistons, Milwaukee Bucks, Orlando Magic and Boston Celtics.

Both Mueller and Smith are also part of the Houston Rockets acrobatic slam dunk team, Anti-Gravity, and like any Rockets fan, they've been watching the roster moves carefully, especially with the addition of Carmelo Anthony.

"I'm so looking forward to next season. We have more offensive fire power. We got the reigning MVP. They're more cohesive. And we have a great team. They're healthy. They'll be the team to beat," Smith said.

That's not the only Rockets connection, thanks to the founder of the United States Freestyle Dunk Federation, Jerry L. Burrell.

Long before Clutch was getting into mischief at Toyota Center, Burrell was Turbo, the mascot that flipped all over the court and bounced off trampolines, wowing fans.

Mueller, who has been at this for 17 years, credits Burrell with helping him get involved in acrobatic dunking professionally.

"I walk into the Compaq Center, working for the Houston Rockets, and I see Turbo out there doing his thing, practicing slam dunking and I said, 'Wait a minute, that's a real sport, how do I do that?' So I talked to Turbo and he let me jump on a trampoline and here I am," he explained.

Combining gymnastics with slam dunking in the United States dates back to the 1980s with an Ole Miss cheerleader named Ty Cobb. He and his brother used a basketball goal and a trampoline to jump, dunk and flip.

Since then, members of USA Dunk have used their skill sets to help raise more awareness for the sport.

"I would say a long-term goal would be for this sport to be part of the Olympics. I think one obstacle was we were looked at as solely a performance group, we weren't looked at as a competitive sport. But this is to show people we can be competitive and entertaining as well," said member Eddie Johnson, who says dunking has taken him to all parts of the world including Mexico and China.

For the upcoming show in Budapest, USA Dunk says fans can expect to see them do tandems, twists, flyovers, pyramid structures, jumping over people while flipping, daredevil acts and more.

They make it look easy, but be warned, it's dangerous. If you want to get involved, it requires great strength and to an extent, overcoming fear.

"If your core isn't tight when you hit that trampoline, you're just going to buckle out, so a lot of core exercise, and being flexible. You're going to land wrong on occasion, but if you're flexible you'll get hurt a little bit less," said teammate David St. Pierre.

"You're hitting the trampoline and diving 15 feet in the air toward another stationary object, the basketball goal. So if you were to hit that with your body, the basketball goal wins every time," Mueller added. "If you land wrong, you could break a bone. You could die from the sport."

Despite the risks, USA Dunk says they're excited to return to Budapest and hope to take home gold after getting silver during the inaugural event in 2016.

And even though they have an all-male team right now, there's plenty of room for women, Mueller says.

If you want to get involved in the sport, the team recommends heading to a gymnastics gym or trampoline park and working on different maneuvers with a basketball.

"It kinds of feels like you're flying, jumping off the trampoline and being able to dunk," said member Joey Bartman.