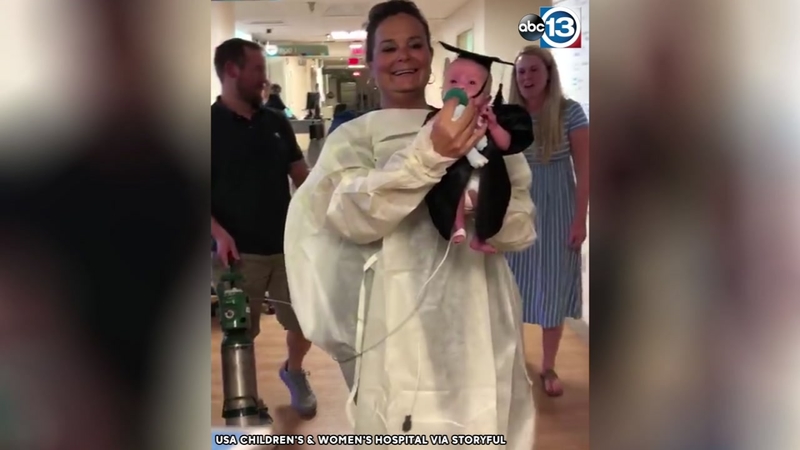 Baby in cap and gown 'graduates' from NICU

MOBILE, Alabama -- A baby boy who was born at just 22 weeks was discharged from the neonatal intensive care unit at USA Children's & Women's Hospital in Mobile, Alabama.

A video shared to the hospital's Facebook page shows 5-month-old Cullen Potter "graduating" from the NICU after spending 160 days in hospital.

The infant dons a tiny cap and gown, which his mom Molli bought in a Build-a-Bear store, according to AL.com.

Molli and her husband Robert tried 16 different hospitals before they found one that would take a chance on Cullen.

"If he was fighting, we were going to fight no matter what," Robert said.

The footage, which has more than 8 million views, shows Cullen in the arms of one of the NICU's nurses, while his parents can be seen proudly following the procession.
Report a correction or typo
TOP STORIES
No bond granted for suspect in Pct. 5 corporal ambush killing
Bodies found in back seat and trunk of burning vehicle in Liberty Co.
Attorney of man questioned in dad's death wants him to seek help
Houston greenlights plan to help homeless find housing
EPA announces cleanup plans to address Fifth Ward cancer cluster
Investigation underway in pregnant woman shooting
Search underway for suspect in Texas City double shooting
Show More
New Buffalo Speedway bridge opens over Brays Bayou
ABC13 sits down with 3 of 5 Democrats looking to unseat AG Ken Paxton
You could get paid to get your COVID vaccine or booster
Man who sold weapon to Colleyville synagogue standoff suspect charged
C. Baldwin Hotel announces downtown watch party for The Bachelor
More TOP STORIES News