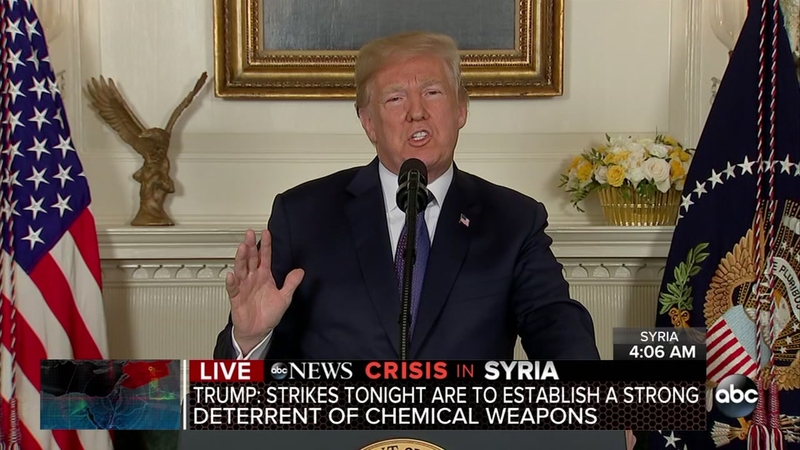 Addressing the nation Friday evening as loud explosions lit up the skies over the Syrian capital of Damascus, Trump said the joint strike with France and United Kingdom is currently underway.

"A short time ago, I ordered the United States Armed Forces to launch precision strikes on targets associated with the chemical weapons capabilities of Syrian dictator Bashar al-Assad," Trump said. "A combined operation with the armed forces of France and the United Kingdom is now underway."

Trump said that the "massacre" last weekend in Syria "was a significant escalation in a pattern of chemical weapons use by that very terrible regime."

"The evil and the despicable attack left mothers and fathers, infants and children thrashing in pain and gasping for air. These are not the actions of a man," Trump said, referring to Assad. "They are crimes of a monster instead."

Trump also delivered a message to Iran and Russia.

"To Iran and to Russia, I ask, what kind of a nation wants to be associated with the mass murder of innocent men, women and children? The nations of the world can be judged by the friends they keep. No nation can succeed in the long run by promoting rogue states, brutal tyrants, and murderous dictators," Trump said.

"In 2013, [Russian] President [Vladimir] Putin and his government promised the world that they would guarantee the elimination of Syria's chemical weapons," he continued. "Assad's recent attack and today's response are the direct result of Russia's failure to keep that promise. Russia must decide if it will continue down this dark path or if it will join with civilized nations as a force for stability and peace. Hopefully, someday we'll get along with Russia and maybe even Iran. But maybe not."

Trump added that the U.S. "does not seek an indefinite presence in Syria."

"We look forward to the day when we can bring our warriors home," he said. "... We cannot purge the world of evil or act everywhere there is tyranny. No amount of American blood or treasure can produce lasting peace and security in the Middle East.

More than 40 people, including children, may be dead and many more injured in a possible chemical attack near Syria's capital.

The strike came as Trump has alluded to military action in Syria all week, even tweeting on Wednesday that Russia should be "ready" because "nice and new and 'smart'" missiles "will be coming." But Thursday, he seemed to walk back that statement, tweeting military action "could be very soon or not so soon at all."

Trump has reportedly been moved by images of the chemical weapons attack on the Syrian city of Douma outside of Damascus all week, calling it "atrocious."

"We cannot allow atrocities like that. Cannot allow it," Trump told reporters during a Cabinet meeting on Monday, adding he expected to make a decision on a response in the next 24 to 48 hours.

Images showed victims of the attack foaming at the mouth.

Defense Secretary James Mattis and Chairman of the Joint Chiefs of Staff Gen. Joseph Dunford met with the president at the White House on Wednesday to discuss the situation in Syria. There were additional National Security Council meetings on Thursday and Friday.

Trump also spoke to French President Emmanuel Macron and U.K. Prime Minister Theresa May several times by phone this week. The administration said previously any response Assad's alleged chemical weapons use would be done in consultation with allies.

"The Syrian regime has a history of using chemical weapons against its own people in the most cruel and abhorrent way," May said. "And a significant body of information including intelligence indicates the Syrian Regime is responsible for this latest attack."

Perhaps in preparation for a strike, Syria repositioned some of its aircraft from bases earlier in the week, a U.S. official told ABC News. A second official said the Syrian military had gone into an increased defensive posture.

On Wednesday, the World Health Organization said that during the shelling of Douma, "an estimated 500 patients presented to health facilities exhibiting signs and symptoms consistent with exposure to toxic chemicals."

"More than 70 people sheltering in basements have reportedly died, with 43 of those deaths related to symptoms consistent with exposure to highly toxic chemicals," the organization said. "Two health facilities were also reportedly affected by these attacks."