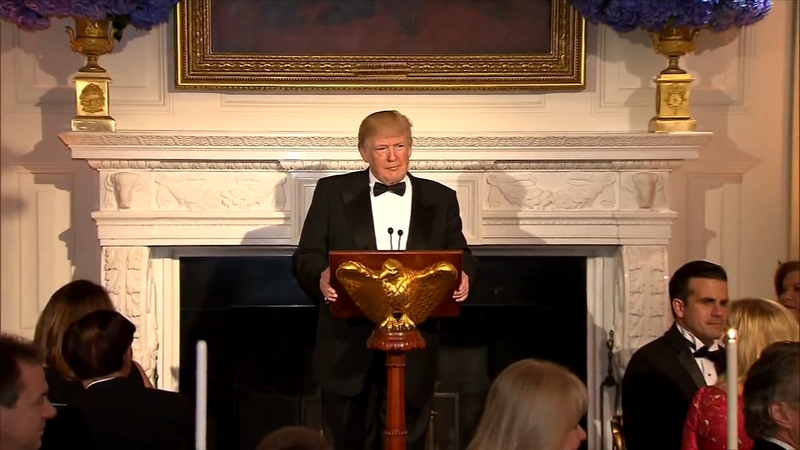 President Donald Trump says he had lunch with NRA leaders

WASHINGTON -- President Donald Trump told the nation's governors on Monday that he would have rushed in to aid students and teachers during the deadly mass shooting at a Florida high school.

"You don't know until you're tested but I think I really believe I'd run in there even if I didn't have a weapon and I think most of the people in this room would have done that, too," Trump said at a White House meeting.

He again found fault with the officers who didn't stop the gunman who carried out the massacre. "They really weren't exactly Medal of Honor winners," he added.

RELATED: What to know about Dana Loesch, the public face of the NRA

Under pressure to act to stem gun violence on school grounds, Trump solicited input from the state chief executives during meetings Monday at the White House. The governors are in Washington for their annual winter meeting.

"Our nation is heartbroken. We continue to mourn the loss of so many precious and innocent young lives," Trump said during a meeting with 39 governors. "But we'll turn our grief into action. We have to have action."

Seventeen students and teachers were killed in a Valentine's Day shooting at Marjory Stoneman Douglas High School in Parkland, Florida, sparking a public outcry for new gun-control measures as well as action to improve school safety.

Conferring with governors, Trump said his calls for the arming of teachers wasn't a universal one, instead likening it to taking advantage of educators with athletic talents to provide additional protection within schools.

The president pointed to a number of ideas that he has floated since the shooting, including improving background checks for gun purchases, arming educators, re-opening mental institutions and banning "bump-stock" devices like the one used during the shooting at a Las Vegas music festival.

He has also suggested raising the minimum age for the purchase of assault-style weapons along with paying teachers bonuses for carrying concealed weapons as a way of warding off potential shooters.

Washington Gov. Jay Inslee, one of two Democrats to address Trump publicly, expressed his concerns over arming teachers as a way to respond to the school shootings. "We need a little less tweeting, a little more listening," Inslee said.

Trump defended the proposal, saying he believes "retribution" is the only way to prevent more school shootings.

During the 75-minute event, Trump called on Florida Gov. Rick Scott to outline the steps he is taking to respond to the shooting in South Florida. Scott said he plans to increase funding to protect schools and to tighten gun restrictions on those with mental health issues.

The president renewed his criticism of former Broward County Sheriff's deputy Scot Peterson as the officer's lawyer said in Florida the accusations are untrue that he acted unprofessionally and cowardly during the shooting. Lawyer Joseph DiRuzzo said Monday that the school resource officer didn't enter the high school because it sounded like the shooting was happening outside the building.

The president told the governors, "Look at Peterson. Look what he did in Broward where he thought he was probably a brave guy, but he wasn't a brave guy under pressure. He choked and other people choked."

Trump said he had lunch during the weekend with key leaders of the National Rifle Association, including Wayne LaPierre and Chris Cox, and said the NRA officials "want to do something" to address the issue.

Trump said there is "no bigger fan of the Second Amendment than me," but there's a need to boost background checks and ensure that a "sicko" is unable to get a gun.

Trump's session with the governors was the latest in which he solicits ideas for stopping gun violence at schools as the White House works to finalize an expected legislative proposal. Trump spent several days last week hearing emotional pleas from parents and students, including some who survived the Parkland shooting, and others who suffered through school shootings in Connecticut and Colorado. He also solicited input from state and local officials.

"To be honest, I don't know," the mother of three said in an interview with NBC News from South Korea, where she attended the closing ceremonies of the Winter Olympics. "Obviously, there would have to be an incredibly high standard for who would be able to bear arms in our school. But I think there is no one solution for creating safety."

The NRA, which backed Trump for president, opposes increasing the minimum age for assault-style weapons purchases but favors arming teachers.