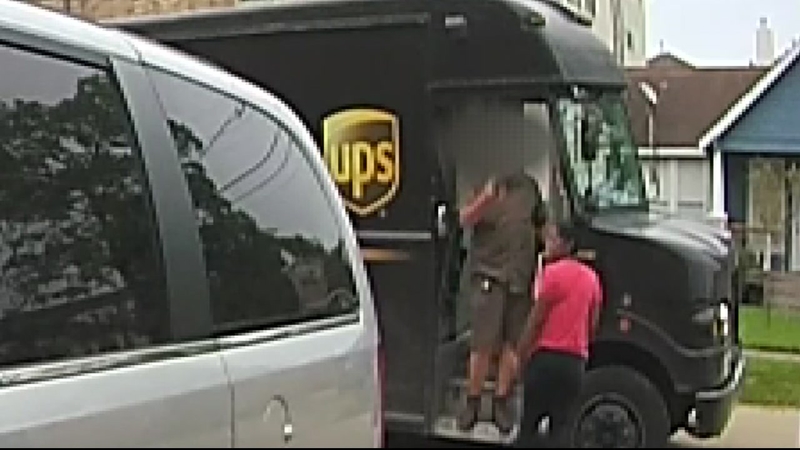 HOUSTON, Texas (KTRK) -- A Houston woman said getting to know her delivery driver saved her from falling victim in an identity theft case.

"My UPS guy said that's never happened to him before," Kayla Sickman said. "He's been doing this for 32 years."

Last Friday, a doorbell camera captured the moment a woman approached a UPS truck. Before the driver could deliver the package, the woman asked for it.

She showed him an ID that had her photo, and address where the package was supposed to be delivered. Instead of handing it over, the driver questioned the woman because he knew the real homeowner, Sickman.

"It's pretty crummy," Sickman said. "I don't know what kind of person thinks that's an okay thing to do."

Sickman said the issue started when a $985 charge appeared for a currency order on her credit card. She had it canceled, and ordered new cards.

Sickman couldn't believe when the package arrived, not only was a woman there to get it, but had an ID with her information.

"I was pretty shocked," Sickman recalled. "It was pretty crazy that some lady out there has my name on an ID and her face."

Houston Police Department is still looking for the woman. After the delivery driver confronted the woman, she took off in a red Toyota Camry.

Since last week, Sickman added another camera at her house. She's watching her statements closer. But her best piece of advice: don't ignore delivery drivers.

"You want to know these people, and if you are home at any time and you see them, say 'Hi' and walk out the door before they walk away, so they can see your face so they get familiar with you," Sickman said.

This way, Sickman said the routine delivery will feel out of place if someone tries to steal your identity.