Suspect in University of Virginia student disappearance arrested in Galveston 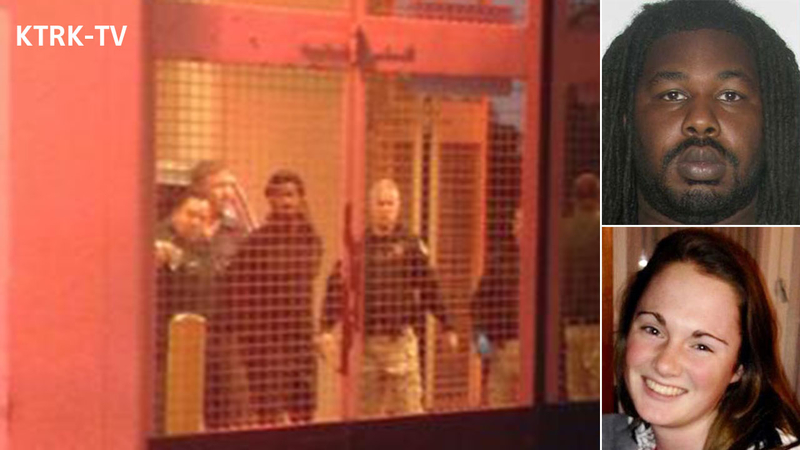 GALVESTON, TX (KTRK) -- A man charged in the disappearance of a University of Virginia student was captured in Galveston on Wednesday, a day after police announced they had probable cause to arrest him.

Police believe Jesse Leroy Matthew Jr. was the last person seen with Hannah Graham, an 18-year-old sophomore who went missing on Sept. 13. Authorities obtained a felony warrant for his arrest late Tuesday. He has been charged with abduction with intent to defile.

Matthew had sped away from a police station Saturday after coming with family members to ask for a lawyer. It's not clear whether the longtime area resident knew Graham, who was last seen in an area lined with shops and restaurants where police believe she went into a bar with him.

Charlottesville Police Chief Timothy Longo announced Matthew's capture at a news conference Wednesday night. He said Matthew was in custody in Galveston, Texas, and would be extradited to Virginia. ABC-13 was the only TV station to capture video of the suspect in custody at the Galveston County Jail.

"We don't at present have any information as to what might have prompted Mr. Matthew to head to that part of the country," Charlottesville Police Chief Timothy Longo said.

A day before his capture, surveillance cameras inside a Galveston convenience store caught him buying mosquito repellent.

"He asked me the question if it's safe to stay on the beach, so I told him yeah it's good there," store owner Dave Paresh said. "He did buy some Off! from me and he walked outside and then came back again ... and got some water from me and then he just walked out."

Paresh said he had no idea Matthew was a wanted man.

"Some scary people come in here, like him," he said. "I'm glad I didn't know that yesterday."

According to the Galveston County Sheriff's Office, Matthew was located on the beach in Gilchrist on the Bolivar Penisula at around 3:30pm.

Longo added that police were still searching for Graham.

"This case is nowhere near over," said the police chief, who did not take questions from reporters. "We have a person in custody but there's a long road ahead of us."

A dispatcher at the sheriff's office in Galveston referred questions about the arrest and timing of Matthew's extradition to Charlottesville police, who did not provide details at the news conference and did not immediately respond to telephone messages afterward.

Adam S. Lee, special agent in charge of the FBI office in Richmond, said at the news conference that "the real hero of today is an employee, a deputy with the Galveston County Sheriff's Office."

"So we'd like to, on behalf of the FBI, thank them for their very effective police work today."

The case has spread fear through the quiet community about 70 miles west of Richmond. Authorities have increased patrols and a late-night transportation program for students, who also have begun walking in pairs at night and are paying closer attention to their surroundings.

While police continued searching for Graham and struggled to make sense of what led to her disappearance, a vigil was scheduled Wednesday evening at her alma mater, West Potomac High School in northern Virginia. Graham was an alpine skier and alto saxophone player who had earned straight A's six years in a row, according to family members and police.

According to police, Graham met friends at a restaurant for dinner on Sept. 12 before stopping by two parties at off-campus housing units. She left the second party alone, police have said, and sent a text message to a friend saying she was lost.

Surveillance videos showed her walking, and at some points running, past a pub and a service station and then onto the Downtown Mall, a seven-block pedestrian strip where police believe she entered a bar with Matthew.

The university said he's been employed at the University of Virginia Medical Center since Aug. 12, 2012, as a patient technician in the operating room.

The charges against the 6-foot-2, 270-pound Matthew surprised Dave Hansen, who first met him about 11 years ago when Hansen served as an assistant pastor at an area church.

"I always thought he was a gentle giant, just a nice guy," Hansen said. "He seemed genuine with his faith and spirituality. ... I don't see him doing this at all, but that's usually the case, I guess."

Hansen said he's only kept up with Matthew through Facebook, but ran into him at the university's medical center within the last year. He said the soft-spoken Matthew greeted him in an elevator with a high-five.

Matthew attended Liberty University from 2000 to 2002, said officials with the Lynchburg school founded by the late Rev. Jerry Falwell. The school's athletics website listed him as a defensive lineman on the football team.

More recently he also served as a part-time volunteer for the football team at The Covenant School, a private Christian pre-kindergarten through 12th-grade school in Charlottesville. Officials said his involvement with the school began last month following interviews with the athletic director and head football coach, as well as normal background and reference checks.

After Matthew was named a person of interest in Graham's disappearance, school officials said in a letter that he will "no longer be working with our football program while this matter is being clarified and resolved."

While Matthew has had past brushes with the law, the details of those cases are not clear.

Online court records show Matthew was convicted of trespassing in 2010 but provide no details about the incident. Details also were unavailable for two other charges of assault and attempted grand larceny relating to a 2009 incident that were not prosecuted. Matthew, who had a taxi permit from the Virginia Department of Motor Vehicles from 2007 through 2010, also has several traffic infractions, records show.

The latest revelations came late Tuesday, when police, who have searched Matthew's car once and his apartment twice, decided they had probable cause to charge him in the disappearance. Longo declined to say what new information police had, but authorities sent several items, including clothing, to a state forensics lab for testing.