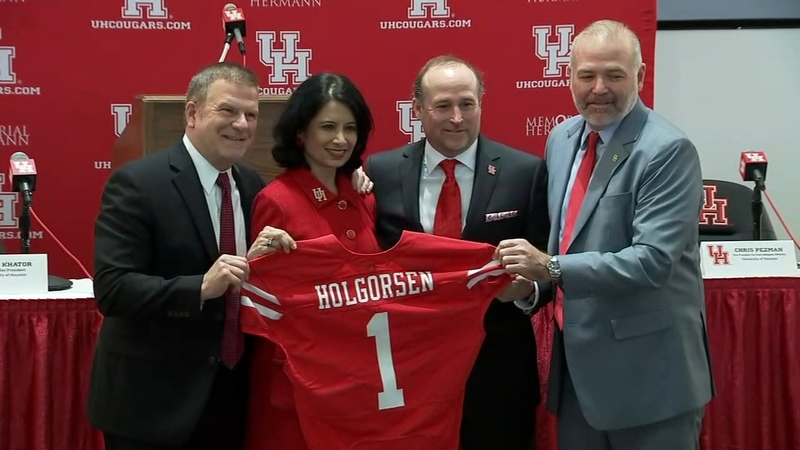 HOUSTON, Texas (KTRK) -- The University of Houston is prepping for another football season, and it is the beginning of a new era.

Dana Holgorsen resigned from his head coaching position at West Virginia to join the Cougars back in February, making it a reunion. Holgorsen was with UH back in the 2008-09 season as the offensive coordinator under Kevin Sumlin.

The hiring of Holgorsen was looked at as a marquee one for the Cougars, and there have been changes within the program.

"Me and him have a pretty good relationship, and I'm just ready to get things rolling this year," said Deriq King, the quarterback for the Cougars.

This will be the program's third head coach during King's tenure, but he said the process has been fine. King said he has been able to take different lessons from each other, and that each one is great in their own way.

The Cougars have many bodies at the running back position. Because of running backs taking so many hits throughout the game, Carr said having multiple bodies will help the team in the long run.

"We push each other every day and we're always competing," Carr said.

Carr also gave credit to the Cougars' improved defense, saying a big difference from last year is the togetherness of the unit.

With the defense, one word that comes to mind is "versatility." Safety Deontay Anderson said along with the versatility, the scheme has changed and the unit is more aggressive.

"We set goals for ourselves every day, so we just try to reach those," Anderson said.

One area in particular Anderson said the program has improved is with the strength staff. Anderson said because more coaches were added to that department, they can be more specific with each position.

Josh Jones is going into his last season with the Cougars. When asked if he's had the opportunity to take it all in, he said he's just trying to look ahead on the upcoming season.

With Jones now one of the senior leaders and anchor of the offensive lines, he said he enjoys the competition between the players. Jones said bringing in new guys brings out the best in everyone.

"It's making us work hard and brings us closer together," Jones said.

University of Houston Football is ready to celebrate the upcoming season with its fans with the annual pep rally, Cage Rage, on Friday, Aug. 23 inside TDECU Stadium.

The event is free. Students, fans, donors and alumni will have the opportunity to hear from Holgorsen as well as see Houston native and rapper Lil' Flip and the Spirit of Houston.

The first 2,000 students will get free T-shirts.

Don't miss a performance by @LilFlip713 this Friday at Cage Rage!

No way would we let you get through #CougarREDFriday without any 🔴!

The Cougars are set to begin their season on Sep. 1 against Oklahoma, who just brought in quarterback Jalen Hurts from Alabama.