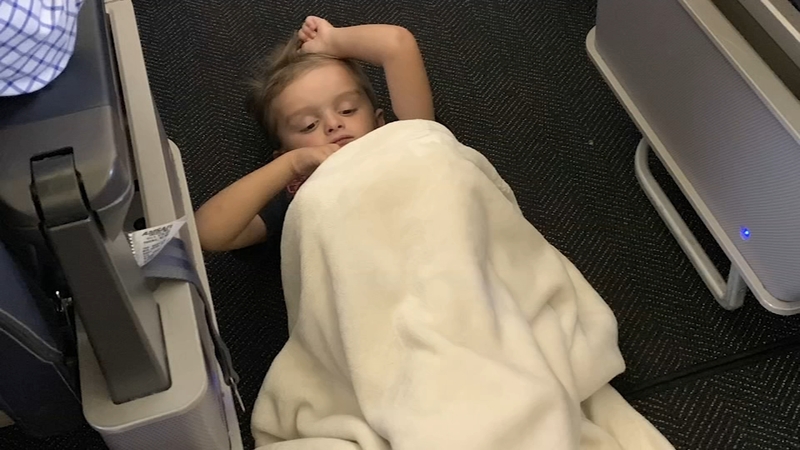 HOUSTON, Texas (KTRK) -- A Houston family with a 4-year-old with autism was brought to tears after passengers stepped in to help them in their time of need.

Braysen and his family were headed back to Houston from a family vacation in San Diego when he became very uneasy on a United Airlines flight.

"I'm thinking we're going to get kicked off this plane, and I'm just going to have to understand," Braysen's mother Lori Gabriel said.

Lori told ABC13 that her son preferred the aisle seat instead of his assigned seat in the middle.

"Me, dad and my 9-year-old daughter were trying to get him back in his seat," Lori explained.

Lori said that she started to worry because Braysen started kicking and moving toward the aisle.

"He started inching his way towards the aisle, kicking his feet on the ground. He even kicked the lady in front of us," she said.

Moments later, the mom became overwhelmed with emotions when she realized that she was surrounded by patient passengers and flight attendants who had looked beyond Braysen's situation and instead saw a sweet child struggling.

"I've never been in a situation where everybody was so understanding," Lori said.

But nothing could have prepared Lori for the sweet note she received later.

"I commend you for your strength. Do not ever let anyone make you feel as though you are an inconvenience or a burden. He is a blessing," the note said.

The passenger, who also happened to work for United Airlines, wrote the kind words on a small folded piece of paper.

"God bless your patience, your love, your support and your strength. Continue to be superwoman, and know that you and your family are loved and supported," the note continued.