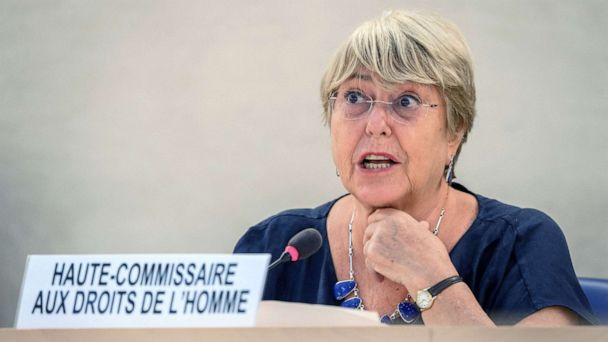 The United Nations Human Rights chief on Wednesday called for a moratorium on the sale of and use of artificial intelligence technology that poses human rights risks -- including the state use of facial recognition software -- until adequate safeguards are put in place.

The plea comes as artificial intelligence develops at a rapid clip, despite myriad concerns ranging from privacy to racial bias plaguing the emerging technology.


"Artificial intelligence can be a force for good, helping societies overcome some of the great challenges of our times. But AI technologies can have negative, even catastrophic, effects if they are used without sufficient regard to how they affect people's human rights," U.N. High Commissioner for Human Rights Michelle Bachelet said in a statement Wednesday.

"Artificial intelligence now reaches into almost every corner of our physical and mental lives and even emotional states," Bachelet added. "AI systems are used to determine who gets public services, decide who has a chance to be recruited for a job, and of course they affect what information people see and can share online."

The report warns of the dangers of implementing the technology without due diligence, citing cases of people being wrongly arrested because of flawed facial recognition tech or being denied social security benefits because of the mistakes made by these tools.

While the report did not cite specific software, it called for countries to ban any AI applications that "cannot be operated in compliance with international human rights law." More specifically, the report called for a moratorium on the use of remote biometric recognition technologies in public spaces -- at least until authorities can demonstrate compliance with privacy and data protection standards and the absence of discriminatory or accuracy issues.


The report also slammed the lack of transparency around the implementation of many AI systems, and how their reliance on large data sets can result in people's data being collected and analyzed in opaque ways as well as result in faulty or discriminatory decisions. The long-term storage of data and how it could be used in the future is also unknown and a cause for concern, according to the report.

"Given the rapid and continuous growth of AI, filling the immense accountability gap in how data is collected, stored, shared and used is one of the most urgent human rights questions we face," Bachelet said.

"We cannot afford to continue playing catch-up regarding AI -- allowing its use with limited or no boundaries or oversight, and dealing with the almost inevitable human rights consequences after the fact," Bachelet said, calling for immediate action to put "human rights guardrails on the use of AI."

Evan Greer, the director of the nonprofit advocacy group Fight for the Future, told ABC News that the report further proves the "existential threat" posed by this emerging technology.


"This report echoes the growing consensus among technology and human rights experts around the world: artificial intelligence powered surveillance systems like facial recognition pose an existential threat to the future [of] human liberty," Greer told ABC News. "Like nuclear or biological weapons, technology like this has such an enormous potential for harm that it cannot be effectively regulated, it must be banned."

"Facial recognition and other discriminatory uses of artificial intelligence can do immense harm whether they're deployed by governments or private entities like corporations," Greer added. "We agree with the UN report's conclusion: there should be an immediate, worldwide moratorium on the sale of facial recognition surveillance technology and other harmful AI systems."