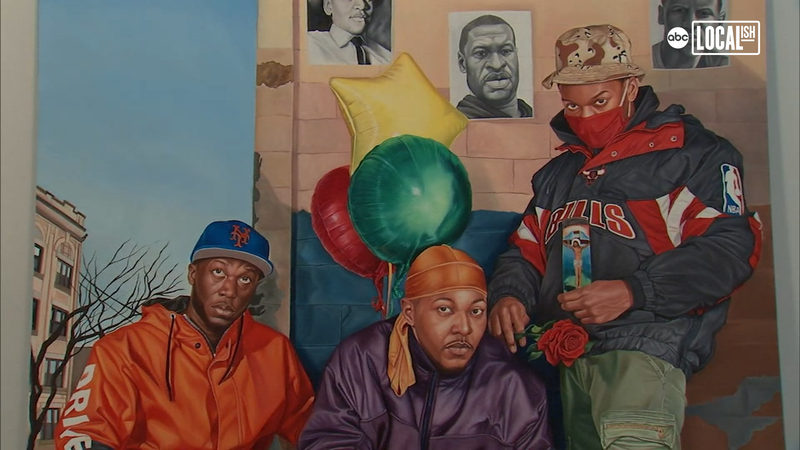 NEW YORK -- A young artist from New Jersey who paints powerful works depicting Black culture is having his first solo exhibit in Manhattan.

The collection of Tyler Ballon's works is at the Jeffrey Deitch gallery in SoHo, and the 25-year-old says his paintings are meant to counter the negative narrative in which he feels the African American community is often trapped.

"We don't always have to be in conflict or struggle to be seen as significant in American society," he said.

Ballon creates the larger-than-life pieces from his home studio in Jersey City, including one that is a nod to the many memorials he saw growing up.

"The people who lost their lives, Emmett Till, Freddie Gray, George Floyd, they were all connected to different stages in my life," he said.

There's also one of four little girls killed in the 1963 bombing of the 16th Street Baptist Church in Birmingham.

"I just wanted them all to be together and show the innocence of these children," he said.

Another depicts the quintessential barbershop.

"It's just like the place where you learn how to be a man, an unspoken brotherhood," he said.

Gallery owner Jeffrey Deitch was so struck by Ballon's work that he knew a one-person show was the only way to go.

"The technique is astonishing," he said. "What really draws me to Tyler Ballon's work is the humanity, it's this feeling of compassion for people's lives."

There's an intimacy about his works, and hence the name of the exhibition, "The House I Live In."