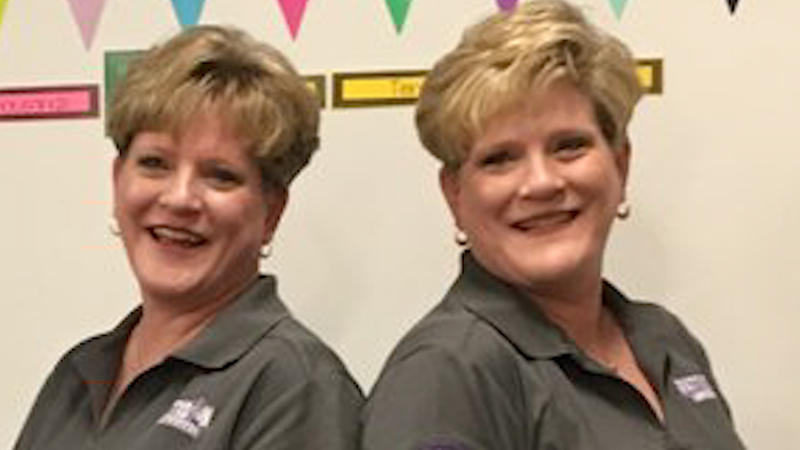 Two teachers, who also happen to be identical twins, now have classrooms right next door to each other.

"I had one student in her class see me in the hall yesterday and he said, 'Hi, Ms. Sanders. No, she's up there. Hi, Ms. Polnac,'" twin teachers Laura Sanders and Dianna Polnac said. "And then I saw him a few minutes later and he was like, 'Which one are you?'"

For the first time in their 16 years working together at Pattison Elementary, Sanders and Polnac have classrooms right next to each other.

You're not seeing double! #KatyISD has two identical twin teachers working at the same school with classrooms right next to each other. Read their inspiring story in the September 1 edition of @KatyMagazine! pic.twitter.com/czdOJHIFpa

Three weeks into school, some students are still getting the twins confused.

"Lots of people were like, 'Hey, I thought Ms. Polnac was right there, but how did she run over here?'" Gallagher said.

The twins told ABC13 that the children will eventually adjust to the new change.

"We don't look alike to us," the twins laughed. "Once the kids get to know us, they know our personalities."

Polnac who teaches second grade English Language Arts has been at Pattison Elementary for 26 years.

Sanders has taught third grade math and science at the same school for 16 years.

"When I got hired on, we thought it was a privilege just to be in the same building," said Sanders. "Our thinking was, 'Oh we'll get to see each other all the time.' But we would never see each other."

Even though they were at the same school, the sisters would talk on the phone every night to catch up. Now, they don't have to do that.

"We've been best friends forever," said Polnac. "It's fun to say, 'Hi' every morning and check in on our families."