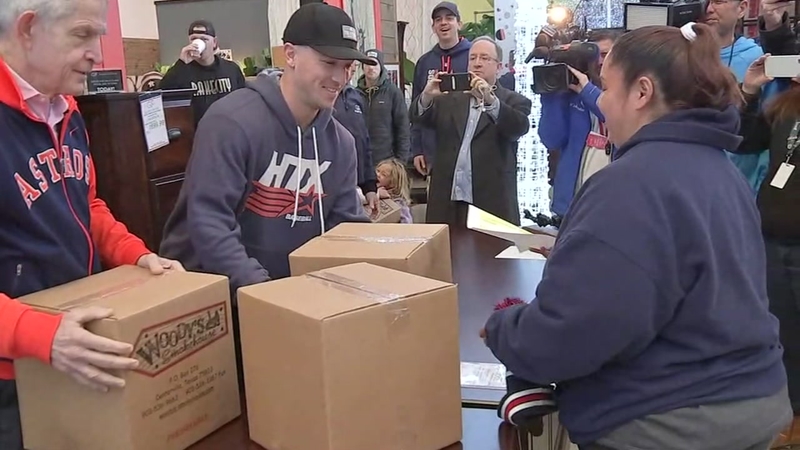 HOUSTON, Texas (KTRK) -- Astros stars Alex Bregman and Max Stassi and Jim "Mattress Mack" McIngvale put smiles on the faces of a lot people who might not have had a Thanksgiving meal without their help.

They gave away 500 turkeys to families in need Thursday morning at the Gallery Furniture location on 6006 North Freeway.

Mattress Mack credits the Astros' superstar with the idea for the giveaway.

"It's part of our continuing responsibility for the well-being of the community and having Alex here just makes it that much better. People like him. He's a very likable guy, great ballplayer and a great role model for all of us," Matrress Mack said.

In order to be considered for the giveaway, families had to complete a form. Mattress Mack and Bregman say they can tell it meant a lot to the families.

"The third person in line said, "I wouldn't have been able to have Thanksgiving dinner without this, so thank you very much.' A lot of 'God Bless You,' so it's been heartwarming to hear that from the people that came out today," Bregman told ABC13.

Both Bregman and Mattress Mack are no strangers to giving back to the Houston community.

Just last week, Bregman surprised a waitress with a $500 tip after her car had been broken into.

The Astros third baseman said he plans to do even more during the off-season that will hopefully help a lot of people.

Houstonians are likely familiar with the different acts Mattress Mack has done to take care of people.

After Hurricane Harvey, the businessman immediately opened the doors of his Gallery Furniture stores to people displaced by the storm.

A few months later, he hosted a free Thanksgiving feast for anyone who wants to come and share a meal.

Mattress Mack says that if you didn't receive a turkey Thursday, he plans to host another feast on Thanksgiving, just like last year's.

Mattress Mack says the giveaway is part of the continuing effort to give back to the community.

The giveaway was especially meaningful for those who will be celebrating their first Thanksgiving in their homes after Harvey. Mattress Mack celebrated the resiliency of those who are still pressing forward in recovery.

"It's just great to see these resilient Texans who keep going until they reach the finish line. Hopefully this little gift today will help make their Thanksgiving brighter this year in 2018," he said.

Bregman agreed, saying he has plenty to be thankful for this season.

"My friends, family, this community of Houston and thankful for being able to play a game. There's so much going on in the world, just thankful to be healthy and happy," he said.