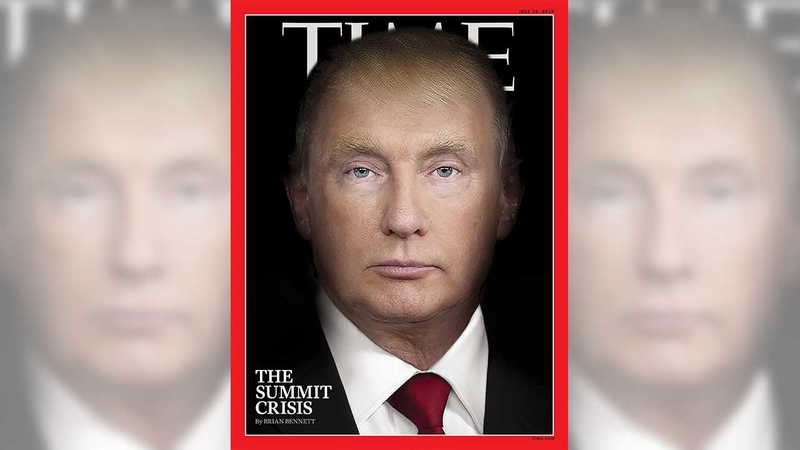 TIME's latest cover might have some doing a double-take. The magazine illustrated the cover story, entitled "Summit Crisis," with a morphed image of President Donald Trump and Russian President Vladimir Putin.

TIME’s new cover: Trump wanted a summit with Putin. He got way more than he bargained for https://t.co/sUu9gGKmmP pic.twitter.com/qq6iOjlis1

Trump has faced criticism from both Democrats and Republicans about his handling of the Helsinki summit with Putin on Monday. Trump has gone back and forth on what was said during the meeting and whether he believes Russia meddled in the election on his behalf.

The president addressed coverage of the summit in a tweet early Thursday.

The Fake News Media wants so badly to see a major confrontation with Russia, even a confrontation that could lead to war. They are pushing so recklessly hard and hate the fact that I’ll probably have a good relationship with Putin. We are doing MUCH better than any other country!

In a story explaining the cover, the editors said the merged image represents the conflict between the question of alleged collusion with Russia and the question of whether Russia attempted to influence the 2016 presidential election.

TIME's Brian Bennett writes in the cover story that the president is unable or unwilling to make a distinction between these two questions.

"A year and a half into his presidency, Trump's puzzling affinity for Putin has yet to be explained," Bennett wrote. "Trump is bruised by the idea that Russian election meddling taints his victory, those close to him say, and can't concede the fact that Russia did try to interfere in the election, regardless of whether it impacted the outcome."

The artist behind the cover, Nancy Burson, said she hopes it causes readers to reflect on the similarities between the two leaders.

"What my work has always been about is allowing people to see differently," she adds. "The combining of faces is a different way for people to see what they couldn't see before."

Burson is known for her facial composite work, including the development of a technique to help the FBI find missing children by aging their faces, TIME reports.

Just last month, TIME's editors made headlines with a cover that depicted Trump looming over a crying immigrant girl in a now-famous image.