Trucker cuts off car in traffic and confronts driver 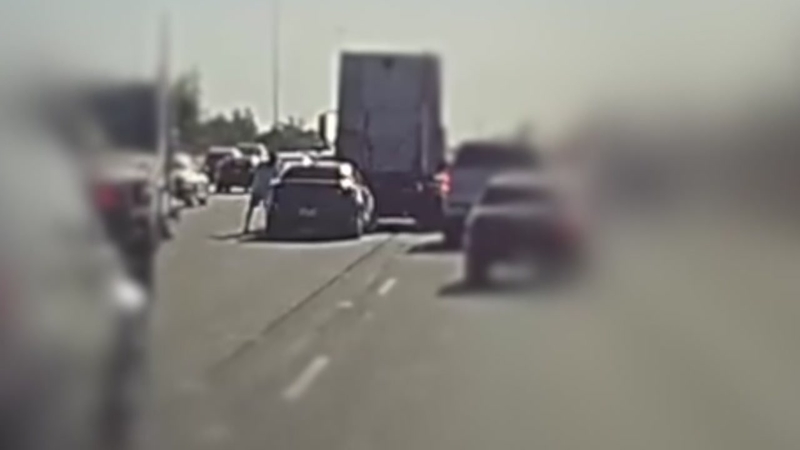 PHOENIX, Arizona -- What would you do if you saw a semi-truck driver weaving in and out of traffic during rush hour?

This is exactly what happened in Phoenix a few weeks ago.

Then, the truck driver got out of his vehicle in the middle of the highway and confronted another driver.

One commuter caught the whole thing on video with their dashcam.

"I see a small Dodge Dart. It comes into the lane on my left, very aggressively. But, what happened a second later literally had me saying a couple of expletives," the driver, who chooses to remain anonymous, told KNVX-TV.

The driver rolled to a forced stop.

The semi cuts through traffic about a quarter of a mile and then swerves through the right lane to cut off the dodge and in result, any approaching traffic had to stop or swerve around.

The DPS says they got a few calls to 911 about this "unknown situation" just a few weeks ago.

"The driver of the semi is blocked in the Dodge, jumped out of his rig and is now basically in a confrontation with the driver window," the witness said.

As the video gets closer, the name of the trucking company is revealed as Turbo Express, which is based in Illinois.

KNVX-TV called them and showed them the video.

They sent them a statement defending their driver by claiming the other driver pointed a gun at him.

That's why he went after the Dodge.

They also said "the incident will be reported to proper authorities."

Problem is, according to DPS, it never was.

"The bottom line is whatever happened between the two just a few minutes before, it pales in comparison to what the semi did. Taking matters into his own hands and endangering the lives of a number of other drivers. That's a ten ton truck weaving around cars during rush hour," said the witness.
Report a correction or typo
Related topics:
arizonacaru.s. & worldroad rage
TOP STORIES
High School senior unenrolled while recovering from open heart surgery
3rd Ward residents fearful after mass shooting in Buffalo, NY
Houstonians worried about ERCOT's ability to meet demand this summer
Texas Attorney General tops runoff ballot
'He didn't deserve this': Boy had repeat head trauma before death
Baby formula maker Abbott says agreement reached to reopen plant
Data breach exposed personal information of 1.8M Texans, audit says
Show More
'On your knees': Video shows man point gun at roommate near downtown
Watson to meet with NFL officials in Texas this week, sources say
Lady Gaga invites Houston to The Chromatica Ball
Wildfire smoke brings haze but rain could wash it away this weekend
Man shot 7 times in cellphone store robbery in NE Houston
More TOP STORIES News