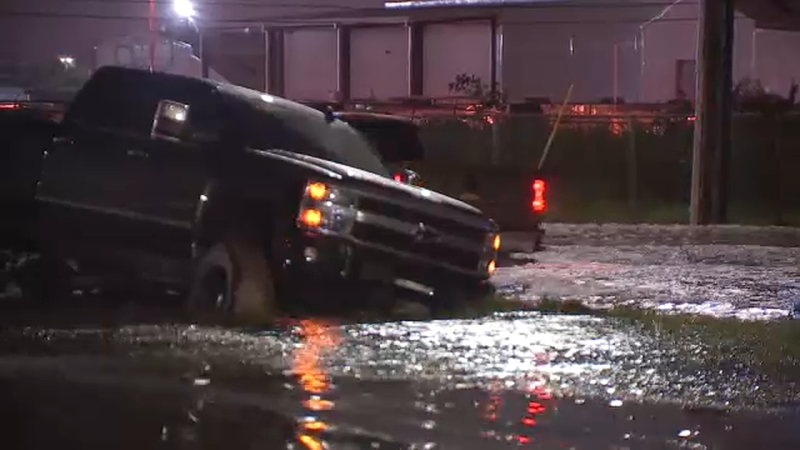 HOUSTON, Texas (KTRK) -- An Uber driver and his passenger were among the several people whose vehicles stalled out in high water Wednesday morning near Hobby Airport as Imelda dropped rain on the area.

The Uber driver was on Monroe Boulevard near Scranton Street in his pickup truck when he drove onto a median to try to escape the floodwater and ended up in a hole.

"I lost traction. It's basically topsy-turvy, so that's why I'm spinning. I have no traction, no weight in the rear. If I had maybe a trailer in the rear, I might be able to pull myself out," said the driver, who did not want to be identified.

One viewer wrote on the ABC13 Weather Facebook page that it was difficult to see the water in Monroe in the dark.

HOUSTON FLOODING: Glad I wasn’t in this Uber!

Driver and passenger stuck in high water on Monroe Blvd, according to wrecker driver

This is near Hobby Airport.

Later in the morning, tow trucks arrived to pull away stalled cars.

WRECKERS, WRECKERS EVERYWHERE: I know I sound like a broken record but *steer clear of Monroe Blvd*

UBER DRIVER AND PASSENGER STUCK: Driver attempted to avoid high water by getting up on the grassy median but drove into a huge hole

This is on Monroe Blvd near the Gulf Freeway - be careful!

AVOID MONROE BLVD: Stalled out cars in every direction!

This is near Hobby Airport off the Gulf Freeway.

Most likely roads to flood in and around Houston