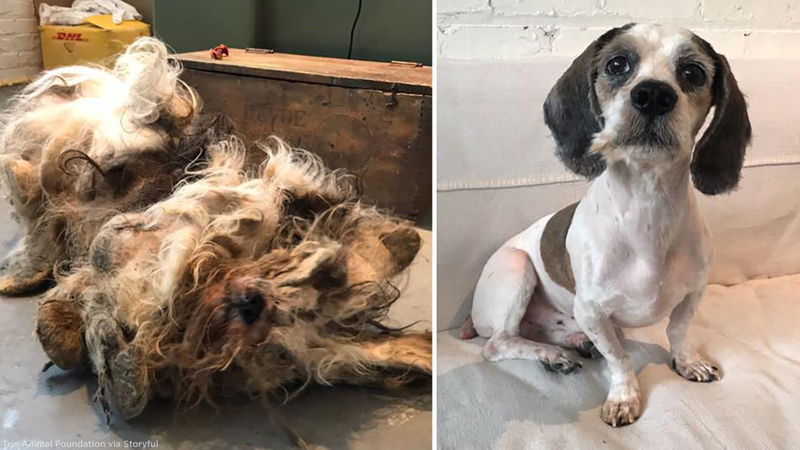 CHICAGO -- A "horribly neglected and abused" cocker spaniel is almost unrecognizable after a Chicago animal rescue organization gave the dog a remarkable transformation.

Photos and video shared by Trio Animal Foundation show cocker spaniel Sang Su with long, matted and urine-soaked fur all over his body. Trio said it was hard to see the dog's face and ears through all of his fur when they took custody of the animal from an Animal Welfare League intake facility in late September.

After a team of four spent two hours performing a medical groom the 26-pound dog, who had to be sedated, he emerged looking entirely different.

Though Sang Su now looks far healthier, he still has a long road to recovery. He has to wear wraps to protect his ears, which are infected and have sores and hematomas. Sang Su also has skin and eye infections and inflammation caused by his overgrown fur.

In addition to his physical ailments, Sang Su still has psychological barriers; the dog's eyes "look vacant" and he "has yet to show happiness," Trio said.

As he recovers, Sang Su has started to eat again and has even made some new friends: Trio's therapy dog Hazel Grace and another dog, Eeyore, have been keeping Sang Su company.

"Sang Su's eyes tell a story of past horrors but his willingness to trust shows that it is not too late to make a difference in his life. Slowly but surely we will get there," Trio said.