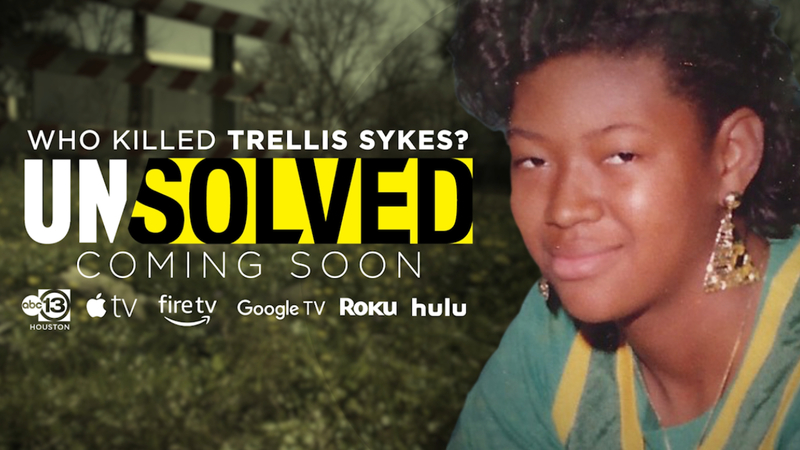 HOUSTON, Texas (KTRK) -- It's been 28 years since Trellis Sykes, a 16 year-old high school basketball star, was murdered while walking to Worthing High School.

On May 13, 1994, Trellis was strangled and raped in Sunnyside, found dead on Redbud Street, just a few blocks from the home where she lived with her grandmother.

Even 28 years later, Pamela struggles to talk about that day. Pam, her daughter, and her mother - who was also Trellis' grandmother - went searching for Trellis in the early evening when Trellis never came home from school. The group came up upon police cars parked in front of an empty lot with overgrown grass as tall as eight feet.

"When the forensics people came and they brought her body out, (Trellis') leg was hanging and we seen the tennis shoe and that's how we knew it was her," Pamela says. "I'll never forget it. Never. Ever."

The killer had been waiting in the weeds, police say.

Pamela says Trellis was the star of the family - and she was going places. Basketball was taking her there. Trellis made a name for herself on the court. At six feet tall, the teen towered over most girls her age, earning her the nickname, "Tre." But, her size was the only intimidating thing about her. Trellis was kind, quiet, and focused in school. Ronnie Evans, the former vice principal at Worthing, says Trellis consistently made the honor roll and was working for a college scholarship.

"(She was) tenacious. The girl could run. She could jump. She could shoot," Evans says. "And I tell you, you could not intimidate her."

"She kept everybody happy. She was a happy girl. She had a happy life," said Pamela.

Trellis fought like hell, Shorten says. The teen broke nails as she clawed at her attacker, trying to get away. Trellis was hit on the head, raped, then strangled, investigators say. Her killer seemingly disappeared through the high weeds into the neighborhood.

"Having someone with that strength and that power-if she tried to scream (no one) would hear her," Shorten says. "We're talking early in the morning. So, people are still glassy eyed and watching the news or what have you. So, it was sad."

"I didn't leave my house for two months," says Pamela. "It was scary. Didn't know who this person was. And always everyone would say, 'Oh, Trellis looks just like you.' And that made me scared."

"School stopped. It really did," says Evans. "The students were so torn up about it from ninth grade all the way through the twelfth grade. They were sick about it. It was unbelievable this happened to one of them. Reality set in that this could well enough happen to them just like it happened to Trellis."

Less than a week after Trellis' murder, her friends and family packed into Christian Hope Baptist Church, praying and crying over the teen's white casket draped with pink roses. There was an uneasiness in the room-not only was the killer still out there, stories about attacks on women and girls in Sunnyside started circulating. No one knew what to believe.

"There were so many rapes going on in the area and we had no clue," Pamela says.

There were, in fact, at least 11 other women and girls attacked and sexually assaulted within a few miles of where Trellis was killed, in the 16 months prior to the high school sophomore's murder. The victims ranged from age 12 to 30.

"The ladies would all describe the same kind of tennis shoes, same height..." says Sergeant Lauren White, with Houston police. White started working on Trellis' case in 2013, when she worked in the child sex crimes division. "It was just an odd coincidence-well, this just wasn't a coincidence."

It would take more than 20 years to test the rape kits from all the sexual assault victims because of a backlog in testing in Harris County.

But by 2013, investigators discovered one person's DNA on 10 of those 11 victims. Police say that DNA belonged to Herman Whitfield.

Whitfield's DNA, however, was not found on Trellis Sykes.

While Whitfield is not a suspect in Trellis' murder, police say he is a person of interest.

"When we saw the map of these close clusters of all these locations where these sexual assaults occurred and she (Trellis) is almost in the middle during the same time period, there's too many coincidences for us to believe that it was someone else," says Lt. Kathryn Reiser, another Houston police investigator who worked the sex assault cases from the early to mid-nineties.

Whitfield initially agreed to talk with us on camera then, the interview took a turn. What happened at that prison in Gatesville is part of our next in-depth Unsolved episode: "Who Killed Trellis Sykes?"

"Her family deserves closure," says Reiser. "They've suffered for so long not knowing. She was just walking to school. She did nothing wrong."

"13 Unsolved: Who Killed Trellis Sykes?" available soon wherever you stream.

A teenager's trip to the movies with her sister in 1975 turned out to be the last time she was seen alive.

Kristen Wilson, 29, had been strangled and possibly sexually assaulted, according to police. She was found dead by her family on November 27, 1996.

It took decades before investigators even knew her name, to give her family answers. But there's still more work to be done.