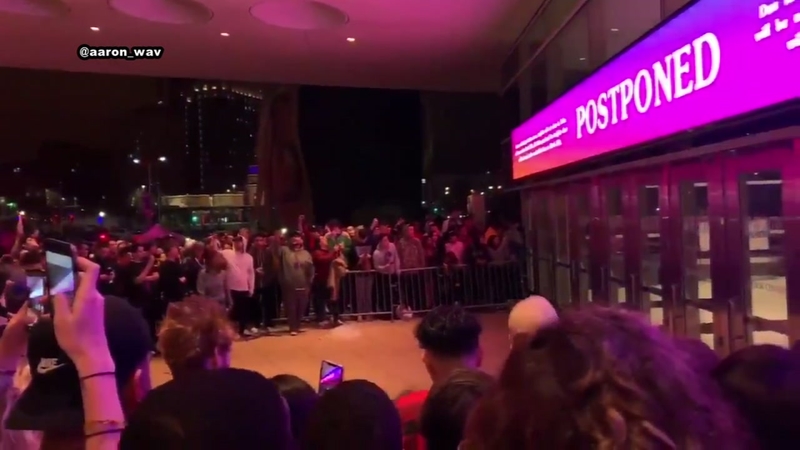 TULSA, Oklahoma (KTRK) -- A sold out Travis Scott concert in Tulsa, Oklahoma, turned into chaos when his show was abruptly postponed.

The BOK Center, the concert venue, tweeted Monday night that "due to technical production issues, tonight's sold out Travis Scott show in Tulsa will be moved to March 26th. All tickets purchased for tonight's show will be honored at the rescheduled show on March 26th."

Due to technical production issues, tonight's sold out Travis Scott show in Tulsa will be moved to March 26th. All tickets purchased for tonight's show will be honored at the rescheduled show on March 26th.

Scott tweeted an apology to fans, also citing the production issues and that he "can't give y'all an incomplete show."

Tulsa so sorry I can’t perform at tonight’s sold out show. We had last minute production issues and I can’t give y’all an incomplete show. Rescheduled to March 26 all tix still valid. Everyone get home safe

But that didn't sit well with some as the crowd started chanting "Let us in!" outside the venue, which flashed a "Postponed" sign on the marquee.

Twitter user aaron.wav shared video with ABC13 showing someone hurling a water bottle at the door and cracking the glass.

This went on for hours as some fans refused to leave. When one fan realized the door was open, that caused more of an uproar, with the crowd rushing the entrance.

At one point, a person was even pepper sprayed.

Fans chant outside the venue where a Travis Scott concert was postponed.

Another fan, Chancey, shared video from a different angle of fans later running away as authorities come to the door.

A Twitter user shared this video of the crowd running outside the vneue where Travis Scott was set to hold his show, but postponed.

Aaron.wav told Eyewitness News that people were so upset because some of them drove for hours or flew in from out of state to attend the concert. He explained that he's seen that kind of energy from fans before at Travis Scott concerts he's been to, adding that a crowd in Oklahoma City broke the barrier between fans and the stage.

My @trvisXX fans!!! He canceled his show in Tulsa last night. Will he have to do it again in #Houston? Let’s hope not. Fans went nuts! #abc13 pic.twitter.com/6w7DvsOpsj

Scott is set to perform in Houston at the Toyota Center on Wednesday night.

At last check, tickets to that show are still available.

RELATED: BACK ON THE ROAD: Travis Scott prepares for 'Astroworld' 2