WLS
By Laura Thoren
CHICAGO, IL -- A man who was stranded for more than 50 hours at O'Hare International Airport used the delay to propose to his girlfriend in Arizona.

Danny Roderique had plans to fly home to Phoenix this weekend to ask his girlfriend to marry him, but bad weather meant his flight out of O'Hare was canceled again and again.

So on Sunday, he decided to take a picture of the diamond ring and asked her to marry him over the phone. She said yes.

"I'm just, holiday travel, I mean, that's all I can say, and the weather," Roderique said.

He's not the only one stranded in Chicago. More than 1,600 flights were canceled Monday at Midway and O'Hare airports.

"We started this morning at 3 a.m. from Harrisburg, PA. Trying to see family in Wichita for the New Year. Hi Grandma!" said Matt Skillen.

Grandma will have to wait. This family's flight to Kansas was one of nearly 1,360 canceled out of O'Hare. They will be in Chicago at least until Wednesday. It was the same deal at Midway.

"I'm going to go back to my house and call my employer and see if they can help me to find other options but otherwise, if there are no other options, I am here until Thursday morning," said Vidal McNeal, whose flight was canceled. 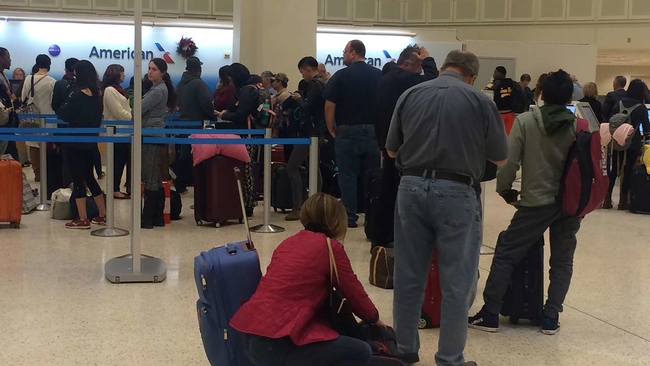