3 hospitalized after charter bus crashes into guardrail in Rosenberg 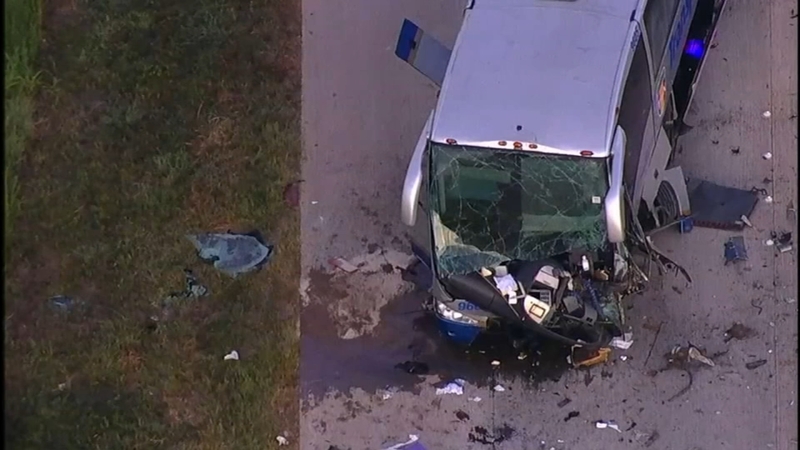 Rosenberg police tweeted that the wreck has the Highway 36 exit closed from the I-69 northbound lanes.

The main lanes are open while TxDOT works to repair the barricades.

Nethery said three people, including one of the bus drivers, were taken to the hospital with non life-threatening injuries.

The second bus driver was sleeping.

No other vehicles were involved.

Officials say passengers were sleeping when the crash happened around 6 a.m. Many had bloody noses, cuts on their legs and scrapes.

One woman says she slid underneath the seat in front of her and scraped her leg.

Passengers told ABC13 they woke up after the crash, and people were on the floor.

Passenger Eric Cortez took pictures of the wreckage while everyone was still on the side of the road.

"I woke up when I felt the bus move. I heard the glass break and heard everyone screaming," Cortez told ABC13.

He says passengers also started helping each other out of the back of the bus, because the front was too damaged.

CHARTER BUS CRASH: More images from SkyEye show the Transportes Del Norte bus heavily damaged and passengers walking on the side of the road. We have crews on the way to the scene: https://t.co/rRd0fveyQT pic.twitter.com/yPhOqBUTuy

The bus started in Matamoros, Mexico and was headed to Tennessee. Passengers were loaded onto a second bus and continued with the journey.

Major accident involving a charter bus has the Hwy 36 exit from I-69 NB lanes closed. Plan for delays. pic.twitter.com/yIVzm5n6iV

Authorities say they are still investigating what led the bus to crash into the guardrail.

ABC13 has reached out to the bus company, but so far, they have not responded.