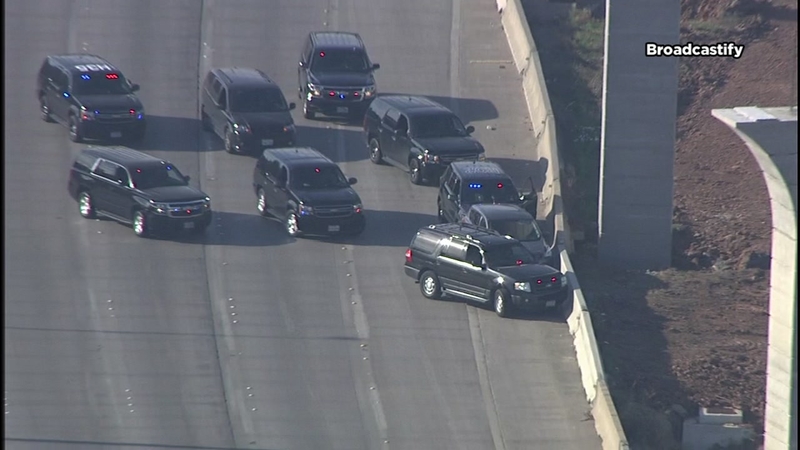 It all started in Baytown as a 911 call for a disturbance at about 7:45 a.m. Baytown police say 42-year-old Eric Brown reportedly threatened his wife with a gun and fired a shot. When officers arrived, the man got into the vehicle and took off, with police in pursuit.

Law enforcement agencies pursued Brown across the east and south sides of Houston, into the Galleria area at one point.

Police say there were reports that he had a weapon and a self-inflicted gunshot wound.

Just before 8:30 a.m., Houston police 'bumped' the rear of the vehicle in a PIT maneuver along the South Loop.

"We tried to kind of just force him off the road," said B.F. Simen with the Houston Police Department. "We tried to find a safe place to do that."

Brown pulled over to the shoulder on the South Loop eastbound at Kirby, but the chase didn't end there.

Listen to HPD call the chase

After being boxed in chase suspect takes off again.

"Time is on our side. We have time," said HPD Officer Troy Finner. "We wanted to just wait it out do what we can, because at the end of the day we want everybody to go home safely."

Driver in police chase turns toward officers before turning back around.

Police drew their weapons, but the driver didn't fully emerge from the SUV. Brown put his hands out the window before slowly driving off again, with the door partially open.

After multiple attempts to bring the creeping pursuit to an end, SWAT officers finally boxed in the SUV and moved quickly to break the vehicle's windows, pulling the suspect to the ground.

"Sometimes it's not pretty," said Finner. "You don't have a book or something where everything works out like it's printed. This is real life police work and suspect actions dictate sometimes our actions and we do the best we can do."

Once Brown was taken in custody, police say they found the suspect was not injured, and there was no weapon in the SUV. He was placed in an ambulance and checked out by EMS.

"I'm proud that nobody is hurt," Finner said. "We ended it. I want to apologize to our citizens. I know a lot of people when it started your on the way to work and when a chase is this long all over the city it ties up the freeways. But again, thank you to the support for our citizens."

Driver in Ford SUV leads police on a chase.

The suspect in a high-speed police chase through north Houston on Friday morning spoke to ABC13 by phone from jail.