KTRK
By Ted Oberg
HOUSTON (KTRK) -- Mayor Annise Parker weighed in the day after ABC-13's investigation into the city's Busted Broken Pothole Process, calling the city-wide ragged roads an "emergency" and a "crisis," but also saying she has confidence in the city's public works department.

"I have done what I've needed to do," Parker said.

ABC-13 was flooded with comments this week from dozens of viewers who disagree. They used the phone, Facebook and Twitter to share stories and photos potholes and ragged roads in their neighborhoods that have remain unfixed.

Monday's ABC-13 investigation found that the number of most street repairs in Houston have dropped dramatically over the last several months -- even after Parker and City Council earmarked $10.8 million in additional taxpayer dollars for street repair.

"Policy has been adjusted to put more emphasis on short-term repair of potholes without abandoning our commitment to do the real work, which needs to be the long-term repair of the underlying conditions that create the potholes," Parker said. "I have complete confidence in Public Works moving forward."

But ABC-13's investigation -- see the video report above -- into the city's pothole problems found that even if the mayor and City Council make filling potholes a priority, it is impossible for the city to move quickly.

A city of Houston flowchart shows the tedious bureaucracy that slows any action: 26 steps are needed, including two meetings, five reviews, seven sets of documents to be prepared and two approvals before in a new street paving crew can be hired.

Between 5 to 7 months is the quickest Houston can repave a craggly city street.

"In all levels of government we have mechanisms in place to prevent us from spending money inappropriately," Parker said. "Many of those mechanisms slow down the wheels of government, which makes us not very nimble when it's necessary to respond to a crisis situation."

That stands in apparent contrast to Harris County government.

Houston officials told ABC-13 Wednesday the city does not currently have any of the on-call deals, but now are working to add them to eliminate the recent delays.

Potholes are sure to be an issue in Houston's November mayoral election. Parker cannot run again because of term limits and the field of candidates is likely to be crowded.

Some of the announced and/or likely candidates have weighed in via social media.

Bill King: @tedoberg City cannot fix potholes because it does not have $$$. To fix potholes must fix finances.

Chris Bell: @tedoberg Streamline the timeline with roving pothole-only crews who find 'em, and fix 'em the same day and post the results for all to see.

Stephen Costello: @tedoberg: Hold the line on city spending so our public works department has the resources to do its job like the taxpayers expect 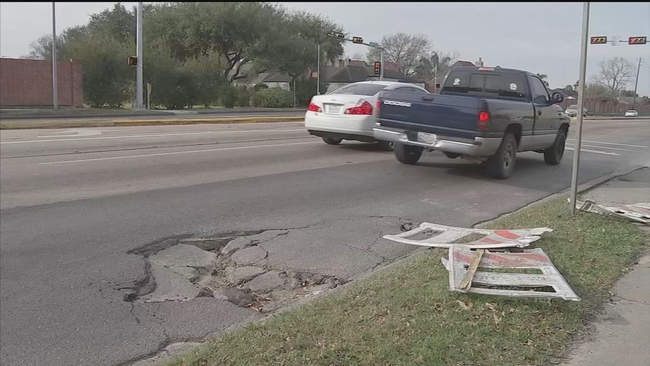 Cash is there, so why no Houston road repair?
TED OBERG INVESTIGATES