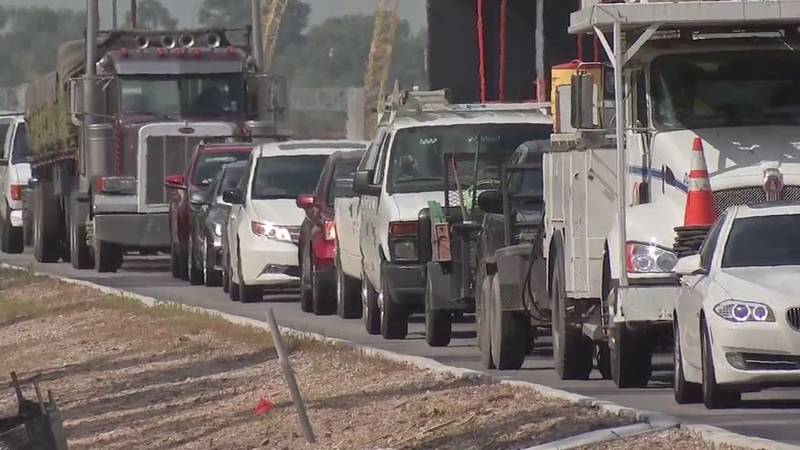 CONROE, TX (KTRK) -- For the tens of thousands driving a complicated stretch of road in southeast Montgomery County there is no such thing as "rush" hour.

"It is absolute gridlock," explained Kenneth Brown, the President of Spring Creek Coalition. He represents some 40,000 of his neighbors. "They kind of just sprung this on us and let us know what was going to be, it seemed, the day before they did it. "

This is the Grand Parkway construction at Rayford Road and Riley Fuzzell---between the Hardy Toll Road and I-45. Progress it seems is fraught with brake lights and heavy equipment.

The traffic flow and lack of communication between TxDOT, the contractor and residents was poor enough that County Commissioner James Noack got involved.

"We've really reached a critical mass when it comes to the level of frustration," said Noack.

He wrote a letter to the Texas Transportation Commission asking for help and better information. They wrote back to tell him they're working on it.

"When you take a four lane road and you condense it down to one lane in each direction, especially when you're constantly changing the traffic patterns without notice to the public it creates gridlock," said Noack, who now has regular meetings with TxDOT to get updates on the work's progress.

TxDOT told Eyewitness News it has met with first responders to keep them informed. The agency also has plans for the contractor to better communicate. Kenneth Brown and his neighbors hope so.

"It's getting worse and worse," he lamented, "but hopefully there's an end in sight. "

The Grand Parkway segments connecting highways 290, 45, and 59 is still scheduled to be completed by the end of 2015, according to TxDOT and the contractor.