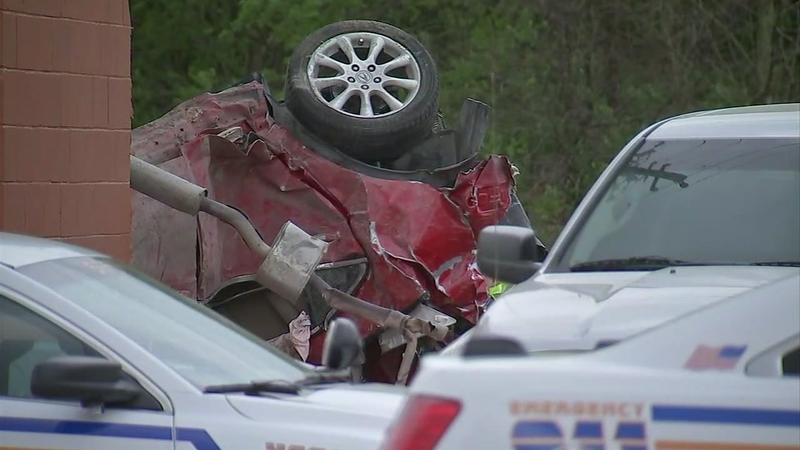 HOUSTON, Texas (KTRK) -- A man accused of driving drunk is facing a murder charge following a multiple car crash that claimed the life of another driver.

Elmer Quintanilla, 26, "will be charged with murder because he caused the death while in commission of another felony," a Harris County Sheriff"s Office statement reads.

The other felony alleged is that Quintanilla was intoxicated, with his three young children in the truck with him. The children are 13 months, 5 and 6 years old. His wife, 25, was also a passenger.

In Texas, it is a felony to drive while drunk with children in the vehicle.

The crash happened on the beltway near West Road early this afternoon.

A trail of twisted metal, shattered glass and crashed vehicles remain after a deadly accident on the Beltway 8 feeder road.

Investigators determined Quintanilla's truck exited the toll road at a high rate of speed, and struck a red Acura sedan. The man in that car was killed.

The impact sent the car through a brick sign. The truck then hit another car, exiting a church parking lot. That car was also crushed by the impact. Then the truck hit a utility pole, which caused two transformers to explode and catch fire.

Power in the area was cut off for hours.Three vehicles in a parking lot were also damaged.

Members of the First Metropolitan Church told Eyewitness News they heard the noise.

"I heard two explosions, and when I looked out the door, I said 'Oh my God," said Evelyn Ogletree, the pastor's wife.

A HORRIFIC SCENE: The vehicle of the deceased driver can be see wrapped around a pole outside this auto shop on the Beltway 8 feeder road.

The wreckage was directly in front of a Firestone Tire store. Employees ran out to pull victims from the wreckage.

The driver in the Acura was beyond help. None of the others involved in the collisions, including the children, had life-threatening injuries.

All were taken to a hospital, including the man charged in the crash. He was taken into custody after he was released from the emergency room, and is now in the Harris County jail.

The name of the victim has not been released at this time.

Deputies in northwest Harris County are investigating a deadly wreck on West Road.

HCSO Vehicular Crimes Division is currently working a major fatality accident incident on the northbound feeder of west rd and beltway 8. Traffic is moving but slow. Please be patient and drive careful as lots of emergency vehicles and personnel are on scene pic.twitter.com/lUsqK69f36

Update to fatality accident. One male is confirmed in one vehicle. Two adults and three children in a second vehicle, were transported to Memorial Hermann in good condition. Scene is still active and ongoing