'I wanted to stay a Toy R Us kid': Warehouse manager serenades employees with poignant take on iconic jingle 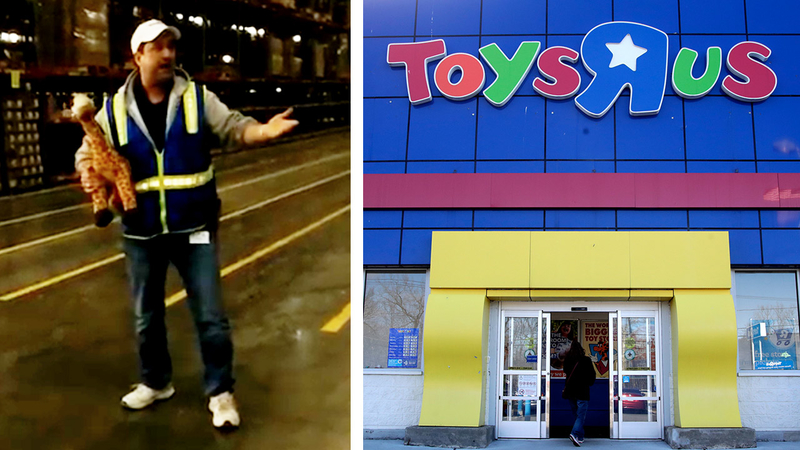 LEE'S SUMMIT, Mo. -- On a Toys R Us warehouse's last day shipping out online orders, a supervisor paid tribute to his co-workers with a new take on the struggling toy retailer's iconic jingle.

Brad Douglas, a manager at a Missouri warehouse that fulfilled online orders from toysrus.com, would often rewrite popular songs and perform them at work to celebrate his employees' birthdays. But on April 6, he rewrote the store's theme song to honor the time he spent with the company and the family rapport he had with his colleagues.

"I didn't want to grow up, I wanted to stay a Toys R Us kid, but things have changed a bit since we've been liquidated," Douglas crooned to a group of employees assembled on the warehouse floor. "The fun we've had with family here are times I'll never forget."

"But it's time to grow up, so let's finish with style. With Geoffrey by our side, we'll send out every last smile," he sang with a plush Geoffrey the Giraffe in hand.

The original jingle, widely used in Toys R Us marketing campaigns for several decades, celebrated childhood and the role that the "biggest toy store there is" played in countless kids' lives over the years.

Amber Collins, the employee who recorded video of Douglas' performance, echoed his feelings about the family-like camaraderie among Toys R Us employees at the warehouse.

"It's sad that Toys R Us is coming to an end," she told ABC. "I am however very grateful that I get to be a part of such an amazing team and company where I can call the people I've worked with family."

Burdened with billions of dollars of debt, Toys R Us recently shuttered its domestic online operations as its brick-and-mortar stores in the United States hold sales to liquidate their inventory. The company is also reportedly fielding 10-figure bids for its Asian business.

Billionaire toy mogul Isaac Larian announced Thursday that he and other investors will bid nearly $900 million to buy Toys R Us stores in the United States and Canada.

Larian, the CEO of MGA Entertainment, previously attempted to raise $1 billion through a crowdfunding campaign to save the struggling toy brand. Over the course of three weeks, nearly 2,000 people collectively donated less than $60,000 to support the cause.

"The time is now. Every day that goes by, the value of Toy R Us declines and more people lose their jobs. I did my part and now it's up to the other side to accept this offer," Larian said in a news release.
Report a correction or typo
Related topics:
businesstoys r usu.s. & worldstore closingretail
Copyright © 2022 KTRK-TV. All Rights Reserved.
TOYS R US
Toys "R" Us is back! New store to open in New Jersey
Over 200K hoverboards recalled due to fire risk
Toys 'R' Us is back... again
Toys 'R' Us opens new store in Galleria
TOP STORIES
'It was like a mad dash:' Clear Creek ISD senior set to graduate
Man dead after being shot during road rage incident, HCSO says
CDC recommends wearing masks indoors, ahead of Memorial Day weekend
Scattered storms move in tonight ahead of front
Murder suspect dead after found unresponsive in cell, sheriff says
Astros fan from Spring celebrates 95th birthday with favorite team
Child hospitalized after found 'unresponsive' at Splashtown
Show More
Runner dies after collapsing at finish line of Brooklyn Half Marathon
Global K-pop sensation Seventeen kicks it in Houston in new tour
'NFTs: Enter the Metaverse' | Trailer
Authorities search ends for man with felony warrant out for his arrest
Early Voting holds off Epicenter to win Preakness Stakes
More TOP STORIES News