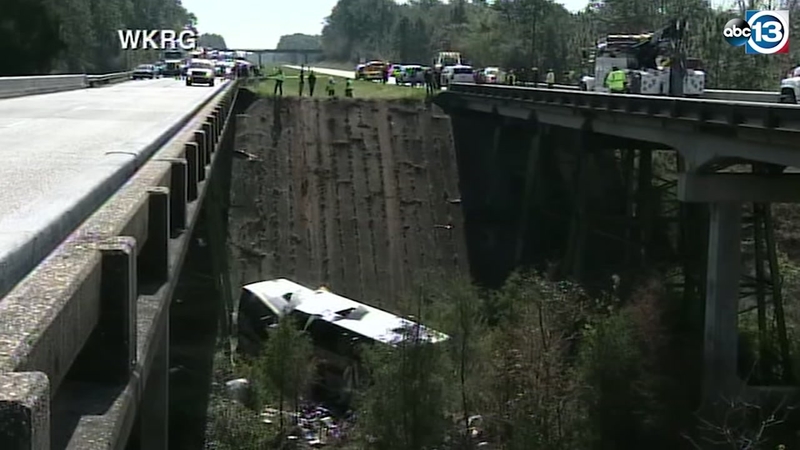 Channelview bus crash told by people that were there

HOUSTON (KTRK) -- The bus company that was operating a charter bus when it crashed outside Mobile, Alabama Tuesday drove nearly 4 million miles in the last federal reporting period with few problems or crashes, according to federal data.

First Class Tours owned and operated the bus that crashed, killing one. Channelview ISD students were on board, returning from a trip to Disney World in Florida.

The company reported 94 drivers with its Houston-based crew and 58 vehicles in federal filings. The company had been inspected 276 times in the last two years. State filings show 68 vehicles in the company's fleet.

The company's website says it employees 155 people, with 61 vehicles.

The most serious incident was a May 2017 crash in downtown Houston where a bus hit and killed a woman. Federal documents show the 62-year-old bus driver was not cited for that incident.

The company has had three other crashes in the last two years, but none included injuries.

Of the 20 violations reported, most were minor, from head lights being out to a turn signal that didn't work. Two drivers were cited in the reports, one for not wearing a seatbelt, the other for speeding. The company had not been cited for any serious violations in the reporting period.

Records show the company was properly licensed and carried the appropriate amount of insurance.

An NTSB team is headed to the scene to conduct an investigation.

For passengers of bus trips, bus safety data is easy to find and offered by the government. You can even download apps for Android and iPhone devices to help you research companies.

The data includes information about driver safety records and how many incidents have been reported with a particular bus company. It also includes inspection reports.

Have a tip for Ted Oberg? A problem to solve? Get in touch with us on our tip page, or send a tip below. (On mobile? You can open our form by tapping here.)
Report a correction or typo
Related topics:
ted oberg investigatesbus crashu.s. & worldstudents
Copyright © 2022 KTRK-TV. All Rights Reserved.
TED OBERG INVESTIGATES
Houston gets extra 'rose' after paying $240k to bring Bachelor to town
Harris County DA demands Hidalgo stop 'daily public misstatements'
Texas has 10 days to fix Harvey plan that gave Houston $0, feds say
Lina Hidalgo suggests DA could have her 'indicted' as political ploy
TOP STORIES
Houston gets extra 'rose' after paying $240k to bring Bachelor to town
Authorities searching for 49-year-old Alvin man last seen May 19
Manhunt underway for woman connected to deadly love triangle
More than 75,000 pounds of baby formula lands in US amid shortage
Trial continues for man charged in Spring couple's 2018 murder
City of Houston to announce website for all Juneteenth events
Rain chances continue into the work week
Show More
Starbucks is leaving Russia for good
Arby's is selling a fast-food staple it's never offered before
'I fought': Trevor Reed describes his survival in a Russian prison
Quiet in the tropics for now
Report: Top Southern Baptists stonewalled sex abuse victims
More TOP STORIES News