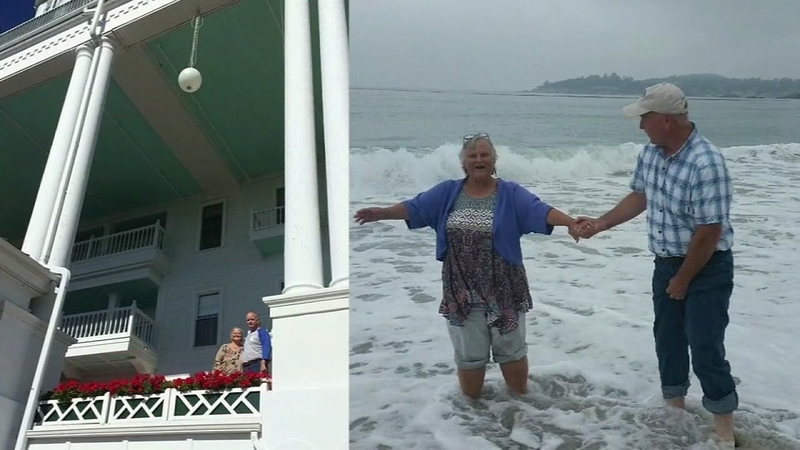 TOMBALL, Texas (KTRK) -- A terminally-ill teacher is close to fulfilling her "bucket list," thanks to the generosity of her students and community.

Michelle Wistrand was the kind of teacher who connected with her students.

We first met Wistrand last February as she was nearing her last year of teaching at Tomball Junior High School after having been diagnosed with Leiomyosarcoma, a cancer of the soft tissue.

Her doctor gave her between two and five years to live. She came up with a "bucket list" and told her 8th grade students.

"Told them my first wish was to go to the Redwood forest and put my feet in the Pacific Ocean," Wistrand said last February.

A group of students at Tomball Junior High School wants to make sure a teacher they love lives out one of her dreams.

For her students, it was a no-brainer. Fundraisers and a GoFundMe account raised close to $11,500.

Wistrand saw not only the forest and the ocean, but also the sea turtles in Florida, her son on stage in Iowa and the Grand Hotel in Mackinac Island, Michigan that was in one of her favorite movies.

None of it would have been possible without the generosity of others and the teens who love her.

"I think it shows she was an awesome teacher and she's had such an impact on the community," said Mickey Nolen, now a 9th grader.

"I have learned that people are kind and compassionate, and that Christ is my all," she said.

Her students take comfort that they gave her some happiness, even if it isn't for as long as they would have liked.

"It's upsetting to love someone so much and know the end is coming. It's upsetting," said Alana Lee, also in 9th grade.

Wistrand has documented her travels, which also included a road trip with her sister to Kansas, on her Instagram account: @WistrandBucketList.