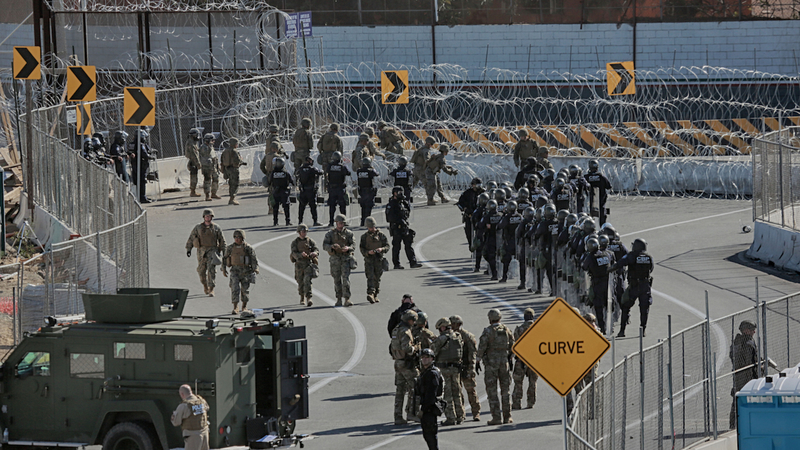 Central American migrants march toward US border in show of force

TIJUANA, Mexico -- Migrants approaching the U.S. border from Mexico were enveloped with tear gas Sunday after a few tried to breach the fence separating the two countries.

U.S. agents shot the gas, according to an Associated Press reporter on the scene. Children were screaming and coughing in the mayhem.

Honduran migrant Ana Zuniga, 23, said she saw migrants open a small hole in concertina wire at a gap on the Mexican side of a levee, at which point U.S. agents fired tear gas at them.

"We ran, but when you run the gas asphyxiates you more," she told the AP while cradling her 3-year-old daughter Valery in her arms.

Mexico's Milenio TV also showed images of several migrants at the border trying to jump over the fence. A few yards away on the U.S. side, shoppers streamed in and out of an outlet mall.

U.S. Border Patrol helicopters flew overhead, while U.S. agents held vigil on foot beyond the wire fence in California. The Border Patrol office in San Diego said via Twitter that pedestrian crossings have been suspended at the San Ysidro port of entry at both the East and West facilities. All northbound and southbound traffic was halted.

Pedestrian crossings at the San Ysidro port of entry are also suspended at both the East and West facility.

Earlier Sunday, some Central American migrants pushed past a blockade of Mexican police who were standing guard near the international border crossing. They appeared to easily pass through without using violence, and some of the migrants called on each other to remain peaceful.

Art Rascon traveled down to Mexico to give us an inside on the migrant caravan heading north. Here's what he learned while traveling with them.

That line of police had installed tall steel panels behind them outside the Chaparral crossing on the Mexican side of the border.

"We can't have all these people here," Mujica told The Associated Press.

Tijuana Mayor Juan Manuel Gastelum on Friday declared a humanitarian crisis in his border city of 1.6 million, which he says is struggling to accommodate the crush of migrants.
Report a correction or typo
Related topics:
politicsmexicoimmigration reformborder wallu.s. & worldimmigration
Copyright © 2021 by The Associated Press. All Rights Reserved.
TOP STORIES
Arrest made in case of Alvin abduction, sexual assault of a minor
20-year-old shot to death during break-in of Conroe home, police say
Man accused of dismembering mom's body after murder appears in court
Houston Astros on pace for record beer year
Astros Game 6 guide: Closures around Minute Maid Park back on tonight
JJ Watt on Texans: 'It hurts me to see where' fan base is now
Don't get stuck in these traffic closures this weekend
Show More
Warrant: Baldwin didn't know weapon contained live round
Prop guns: What they are and how they can kill
4 teens accused of luring victim to his death in SE Houston
SkyEye13 captures video of Bay City funeral home destroyed in fire
Peter Scolari, 'Bosom Buddies' and 'Newhart' star, dies at 66
More TOP STORIES News