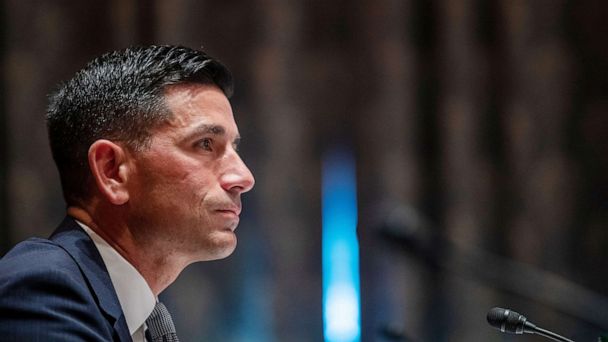 Just two days after he announced his resignation and as the House debates the second impeachment of President Donald Trump, former acting Homeland Security Secretary Chad Wolf said the president deserves some of the blame for the words he used last Wednesday before his supporters stormed the U.S. Capitol, but took no stand on removing him from office.

"The president's words matter and they do," Wolf told ABC News Wednesday. "He certainly has some level of responsibility for at least the words that he said."


"I've talked about my disappointment in wishing that he had come out sooner to condemn the violence and just talk more vocally about that," he added.

Wolf, who is leaving the department this week, said when he first saw the images on TV of rioters at the Capitol, he though they were "sickening and disturbing" and that it reminded him "in a little different manner" of what occurred in Portland, Oregon, over the summer.

For 60 nights over the summer the federal courthouse there was the site of protests on racial injustice and the demonstrations often turned violent after nightfall.

Wolf also said that the responsibility of the security of the U.S. Capitol is with Capitol Police but maintains that the department knew about the threat.

"Leading up to the sixth we had multiple coordination calls -- that DHS was on, (the Department of Defense) was on, (Department of Justice) and local law enforcement was on, Metropolitan Police, Capitol Police were on. We knew about this threat. We knew about 25 to 35,000 people that were coming to the district," he said.

Wolf stressed that everyone -- including the people at DHS -- planned for the worst.


On the question of removing Trump from office over the riot, Wolf said that he defers to members of Congress because he is not an elected official.

"If certain individuals or the Congress wants to take the action that they're taking today, I believe, regarding impeachment, that that's their right, that's their prerogative. I think that's the appropriate channel. If they want to, address that issue with the president, whether it's impeachment, whether it's censure," he said. I think that's the appropriate venue versus the 25th Amendment. I think the 25th Amendment is exceptional circumstances. The vice president outlined that."

Late Tuesday, House Democrats passed a resolution that called on Pence and the Cabinet to invoke the 25th Amendment to remove the president from office.

Just ahead of the final vote, Pence announced in a statement that he would not follow through with Democrats' request of invoking the 25th Amendment and urged Congress to "avoid actions that would further divide and inflame the passions of the moment."

"I do not believe that such a course of action is in the best interest of our Nation or consistent with our Constitution," Pence said in the statement.

Wolf's abrupt resignation came ahead of schedule and as the nation faces a heightened terrorism threat ahead of the inauguration of President-elect Joe Biden. In fact, a short time before he made the announcement that he was stepping down, he instructed the U.S. Secret Service to begin the National Special Security Event operations for the 2021 Inauguration effective Wednesday, instead of Jan. 19.


However, Wolf told ABC News that he resigned in large part due to the several court cases that were pending on his appointment and said he didn't want to hinder the work that the department has done with him being in the acting secretary role.

"I would rather have someone come in as acting secretary with the legal authorities to do a number of things. Just because we're at the end of the administration doesn't mean the business of the department stopped," he said.

He also said that the White House made a mistake in re-nominating him in early January, knowing that the Senate wasn't taking up confirmations and subsequently pulled his nomination a few days later.

"I was not consulted on whether I wanted my name put back up there," he said. "I thought that was weird."

Wolf also said that he's spoken to Biden's pick to lead the department, Ali Mayorkas, and said he thinks Mayorkas is a qualified choice to lead DHS.

"I do think he's qualified. Are his views and his policies the one that I would have picked? Probably not," he said. "But that's not to say he's not qualified, just like I'm sure he would say, my views and policies are not his liking either."
Report a correction or typo
Related topics:
abc newsnational
Copyright © 2021 ABC News Internet Ventures.
More Videos
From CNN Newsource affiliates
TOP STORIES