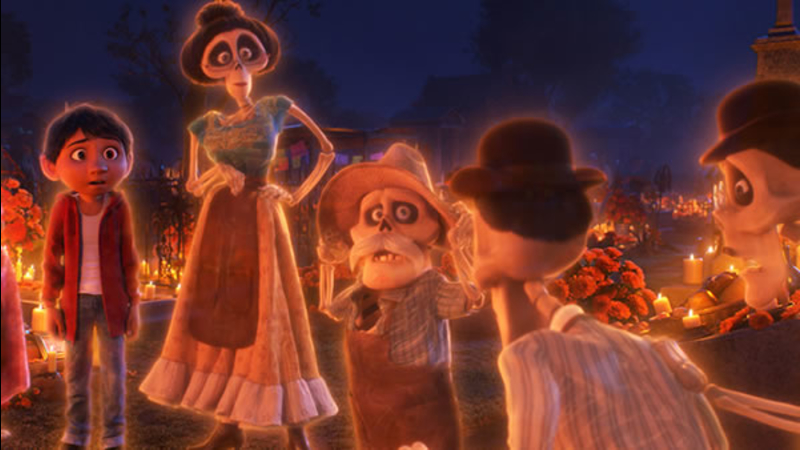 The Language of Coco

Inspiration can happen at any moment. For Disney-Pixar director Lee Unkrich, it happened during a visit with his family to Epcot at Walt Disney World in 2011.

"We were in the Mexico Pavilion and I was looking at some paper mache sculptures. That started the first little seed of me thinking there had never been a film about Dia de los Muertos (Day of the Dead)," he said.

Coco is based in Mexico. It is about a young boy named Miguel whose family comes from a long tradition of shoemakers that shun music out of respect for their great-great-grandmother. That presents a big problem for Miguel because he wants to be a musician and secretly worships the country's biggest singing idol, Ernesto de la Cruz.

Miguel pursues his dream on Dia de Los Muertos, a celebration dating back to pre-Columbian times that honors deceased family members. In the film, Day of the Dead is the only time the spirits of family members can return to the Land of the Living to visit their loved ones.

In his pursuit to become a singer, Miguel finds himself trapped in the spirit world and will need the help of his ancestors to get him back to the Land of the Living.

Originally, Pixar considered focusing the movie on death and overcoming grief, but filmmakers changed their focus after traveling to Mexico to research the holiday.

"This celebration isn't about letting go, it's about keeping memories alive and celebrating life," said Adrian Molina, who co-directed the film.

The movie is ripe with Mexican imagery and traditions that may be new to American families.

Day of the Dead is celebrated on November 2 to coincide with All Souls Day in Christianity. In Mexico, families start setting up altars up to a week before. The altars include some basic elements. Usually, a cloth is put over a table.

"You leave offerings of food and drink and things that your loves ones enjoyed in life to greet them and nourish them once they come home," said Molina.

Candles help guide the spirits back to this world. While it is not required, more elaborate altars can have at least three levels to represent heaven, earth, and purgatory. Other elements include bright orange marigold flowers, sugar skulls, Day of the Dead bread, colorful perforated paper and incense.

Photos of deceased loved ones are a central part of ofrendas.

The photos in the altar play a key role in the movie. A photograph uncovers a secret about his past through a photograph in his family's altar.

Coco's creators added an additional element in the movie that only spirits who were remembered with a photo can return to visit their families on Day of the Dead.

If there is a color of the Dia de los Muertos, it has to be orange. That is the color of the cempasuchil or marigold flower. In Aztec times, the bright orange flowers represented the sun.

The distinctive smell of the flowers is said to guide the spirits back to the land of the living.

The flowers bloom just in time for the celebration and are used to decorate altars. While visiting Mexico, Coco filmmakers saw marigold petals scattered at cemeteries and used to make crosses in altars. That made a lasting impression that made its way into the movie.

"They felt so iridescent, even at night," said Coco story artist Dean Kelly, who liked the way the flowers combined with the glow given off by candles. "We came up with the idea that what if there was a literal bridge made of marigolds."

The marigold bridge is used by ancestors to cross over into the land of the living on the Day of the Dead.

"The marigold bridge literally connects those two worlds and that is building on the mythology of marigold petals representing the path to family," said Harley Jessup, Coco production designer.

There are no flowers depicted in Coco's Land of the Dead, except for marigolds brought back by the ancestors.

Papel picado is the colorful perforated tissue paper that is usually found hanging in Mexican restaurants to provide a festive atmosphere. It also plays an important role in Day of the Dead celebrations. In pre-Columbian times, Aztecs hung paper over altars to represent the wind. Those papers may have included images of deities. Papel picado is now used in modern-day altars. They include images of skulls or flower designs. The paper comes in many colors, but purple is said to represent mourning and yellow signifies purity.

Papel picado plays an important part in Coco. The opening sequence of the movie animates images of papel picado to tell the backstory of Miguel's family and why music is shunned.

Among the first decisions, Coco filmmakers had to make was how to depict the deceased. Mexican culture has many depictions of skeletons, known as calaveras. They first gained prominence through the art of Jose Guadalupe Posada, an illustrator, and satirist who depicted political figures as skulls in the late 1800s leading up to the Mexican Revolution. Calaveras is now one of the most popular forms of Mexican folk art.

The characters in Coco don't stray too far from this style. The bodies were modified slightly to keep clothes from falling through stacks of bones and skulls were designed to show more expression. In contrast to Mexican folk art, which usually depicts the eyes of calaveras as black holes, Coco's characters have eyes and big brows to show more emotion.

The faces of the ancestors have colorful designs etched into them around the eyes and chin, much like people in Mexican communities draw on their faces during Day of the Dead celebrations.

Coco took the biggest license with alebrijes. These are wood carved figurines created by artist Pedro Linares in the 1930s when he fell very ill. Linares had hallucinations and after he recovered, he began creating unusual creatures that blended aspects of distinct animals, like lions and eagles, and donkeys and butterflies.

The brightly colored figurines are collected to display in homes. Pixar character artist Alonso Martinez fell in love with the figurines as a child and has a collection of them in his office. He helped incorporate them into Coco.

Alebrijes do not have mythology associated with them but they were given one for the movie.

They are depicted as spiritual guardians. One the most imposing of the alebrijes in Coco is Pepita, a mashup of a lion and an eagle that guides Mama Imelda, Miguel's great-great-grandmother who is key in getting him back to the Land of the Living.

The movie presented some challenges for Pixar.

"The last thing I wanted to do was make a film that felt like it was made by an outsider. I am not Latino and I will never be Latino," said Unkrich. "If we have any missteps it is not for lack of trying.

Pixar brought in advisers from the Latino community to provide input on the film and for the first time in its filmmaking process screened the movie with non-employees every 12 weeks to make changes when necessary.

Unkrich said his team made big changes to the movie after getting input from the advisers, some of which made the movie more entertaining.

"Early on in the story reels abuelita (Miguel's grandmother) carried a wooden spoon around with her that was tucked into her apron and she would whip that out and she would beat people with it when she was angry at them," said Unkrich. "It was one of our advisers who said, "No, No, No, It has to be her chancla. She has to pull off her slipper and beat them with it."
Report a correction or typo
Related topics:
arts & entertainmentmexicodistractionmoviespixarmoviemovie newsdisneyhistoryhispanic
Copyright © 2021 KTRK-TV. All Rights Reserved.
TOP STORIES
Suspect in teen's road rage shooting death released on bond
Amber Alert canceled for 7-year-old central Texas girl, suspect dead
Search continues for Houston woman missing for weeks
That fall feeling is fleeting
Man attempts to storm cockpit, strangles attendant on JetBlue flight
Who's eligible for Pfizer booster shots?
Southwest Freeway to close for next 2 weekends
Show More
Republican wants to add exceptions for rape to Texas' abortion ban
Experts determine what's to blame for TX winter storm power outages
Whataburger and Katy company chill out with cool new merch for fans
US service member says Afghan refugees assaulted her at Fort Bliss
Former Houston Oilers say Tennessee Titans franchise is 'home'
More TOP STORIES News