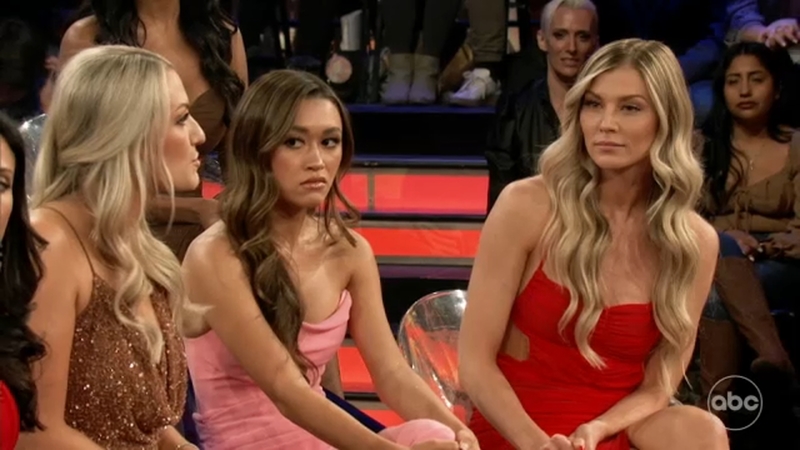 Tempers flare at 'The Bachelor: The Women Tell All'

NEW YORK -- The women that Clayton eliminated are back and he has to face them all at "The Women Tell All." Jesse Palmer promised a very revealing and very explosive night. As he introduced Shanae, the crowd booed.

First Night Drama
First, the show recapped the night one drama with Claire where she said she hated Clayton. Then, it went into the situation with Cassidy. She kept stealing Clayton away to make out instead of taking part in the group dates. It moved into the feud between Shanae and Elizabeth, and who could forget Shrimp Gate? The women were shocked to hear the things Shanae said about not being sorry and also the horrible things she said on her two-on-one date with Genevieve. After the clips were done airing, the other women were outraged that Shanae called them fake and there was a lot of bickering about who was fake. Once they started calling each other b****es, Jesse interrupted them. Then, they circled back to call Claire disrespectful for how she behaved on the first night.

Cassidy's Friend with Benefits?
They got into the drama with Cassidy having a friend with benefits back home and how she felt validated that he wanted to see her after the show. Sierra laid into them for that while Cassidy said he wasn't on the side and she didn't have a relationship. She was upset that she got eliminated over the situation because she says that she would have made sure it was over if she ended up engaged. The other women thought it showed she wasn't ready to be Clayton's wife.

Shanae Called out by the Group
Lyndsey W. said, "From the bottom of my heart, F-you Shanae." Shanae called them all fake again and there was a gaggle of yelling. Jesse told Shanae that she could join in him the hot seat so that she could get a word in. Shanae played the victim again as the women yelled out, "Fake cry!" Shanae tried to call Elizabeth a bad friend and Elizabeth said they were never really friends and she's tried hard to avoid her but that didn't work either. The others there backed Elizabeth up.

Genevieve and Shanae in the Hot Seat
Then Genevieve joined Shanae in the hot seat on stage. Shanae said when she got eliminated from the two-on-one date she was "grieving" and couldn't eat back home. Shanae said that when Genevieve got eliminated she went home and had relations with Aaron from Katie's season of "The Bachelorette." She said she met him at a bar and didn't even kiss him. Genevieve said that the real situation is that Shanae has been sliding into Aaron's DMs and when Shanae denied it, Genevieve said that Aaron sent her a screenshot. Then Shanae clarified that actually she replied to his posts and that is not the same thing as sliding into someone's DMs. Genevieve said, "Well, he thinks you're crazy, so stop." Cassidy told Shanae she squandered her time in the hot seat by not apologizing. Jesse said they could sit there for a week and nothing would change.

Sarah in the Hot Seat
Sarah sat in the hot seat next. They rehashed the beef she had with Mara. Mara said that she didn't think Sarah was wife material. Other women actually backed Mara up and said that she fell on the sword for the group.

Teddi in the Hot Seat
Teddi was up next. She cried after watching the recap of her and Clayton's relationship. She thought it was going to end in an engagement so it was really hard to see things fall apart. While she was flattered to get the first impression rose, it did make her lows feel lower she said. Teddi said she feels open and ready for love now. Then she revealed Clayton's brother slid into her DMs! She said she never replied because, "One Echard boy in my lifetime was probably enough."

Serene in the Hot Seat
Serene said looking back she was surprised at how emotional her brother got on her Hometown Date. She also added that despite her fears, she really pushed herself on the show and she felt like Clayton was the right person to do that for, even though she ended up heartbroken.

Clayton in the Hot Seat
It was finally time for Clayton to face the music. Jesse told Clayton not to worry because he was there with him, they are real bros. He said it has been really hard to watch the show back. He said he made a lot of mistakes, but he did things in the moment that he thought were the best. "I had all the best intentions with the actions that I took," Clayton said. They asked him why he believed Shanae over them and he said trust comes with time and he really wanted tangible evidence. Lyndsey W. said that he should "own it like a man" that he was making out with Shanae because no one forced him. The other women said they were outraged they were sent home before Shanae. "I think you are confusing love and lust," Sierra said. She added she didn't think he's ready to get married yet.

He told Sarah that he thought she was playing games with the other women to get them to leave. Clayton said it put him in a bad spot mentally and he didn't trust anyone then. Sarah said that she originally thought that they had a great relationship, but then she sees that in the playback that he was stirring the pot. Sarah said she wished he had ended their relationship based on what went on between the two of them, not just what the other women had said. They went back and forth about whether or not Clayton had cried, and the group called Sarah a liar again.

The women have a lot to say, and they're not holding back. #TheBachelor #WomenTellAll pic.twitter.com/McThgRjPdi

Clayton told Serene that he didn't end things with her because of anything she said. He didn't want her to feel invalidated. He apologized to her and said she did everything right. He said he wished he had opened up to her instead of having her be the person that had to teach him that. Serene told Clayton she isn't going to close herself off and she added that she appreciated his apology. Kira told Clayton that if he's still single she's more attracted to him than ever and she's still single.

Bloopers - with Jesse!
The funniest part of watching the bloopers section was when Clayton said they were going to watch a recap of Jesse's! They were so funny and it was great seeing Jesse 18 years ago. Of course, they played the clip of him giving a rose to the wrong woman and then taking it back, ha! That poor lady!

Finale Preview
Clayton's in a real pickle because he's in love with three women, Rachel, Susie, and Gabby. He tells all three he loves them and sleeps with two of them on their Fantasy Suite dates. All three of them end up in tears and Clayton's dad tells him he only has himself to blame. Yikes! This is going to be one heck of a finale! Don't miss the Fantasy Suite dates Tuesday night!