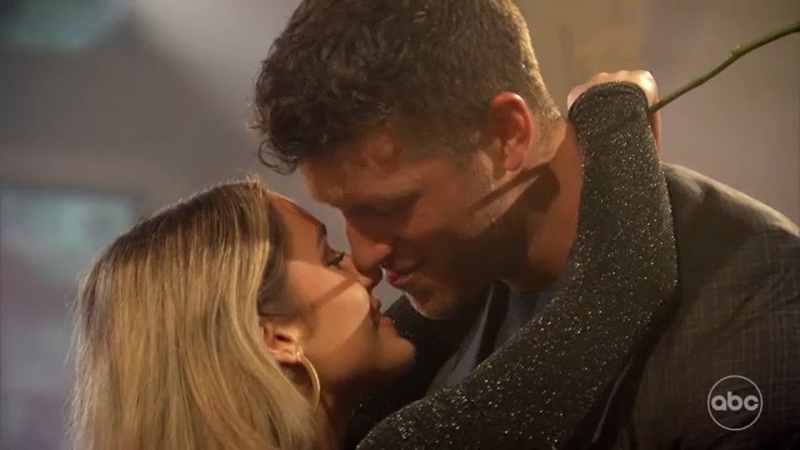 NEW YORK -- Shrimp-gate continued into the rose ceremony from last week as the women attempted to hash it out before Clayton arrived for their scheduled cocktail party. However, he walked in and heard the conversation, and said that he knows about the drama and he had to settle that before he could move forward. Clayton asked Elizabeth and Shanae to talk with him privately outside. Elizabeth came off completely sane while Shanae brought up the shrimp situation. It just sounded ridiculous. Clayton told Elizabeth and Shanae he had to get up and walk away for a minute as he felt they weren't resolving anything, they were just talking about shrimp. After fighting for a minute or two amongst themselves, Elizabeth walked in to talk to the other women and removed herself from the situation with Shanae. Then, Shanae picked up nearly all the pieces of shrimp rolls from a buffet and sat down to enjoy her shrimp.

Jesse walked back in and told the women that Clayton was skipping the cocktail party and going right to the rose ceremony.

In a ridiculous turn of events, Clayton eliminated Elizabeth instead of Shanae. Wow, he's going to be shocked when he watches this back and sees that Shanae said that she would shove the rose up his *bleep* if he gave it to Elizabeth. Yikes.

Back at the house, Gabby was crying with Genevieve over Elizabeth leaving and Shanae getting to stay. She didn't like seeing that justice wasn't served. Shanae told the women that she felt like a weight had been lifted off of her and she was so glad that Elizabeth was out of the house.

The Bachelor Travels to Houston
Jesse arrived and told the women that there would not be a date that day...there in Los Angeles, they were headed out for their worldwide international journey with Clayton. Their first stop would be Houston, Texas. Lyndsey is from Houston so she was excited to be home. Clayton hoped that a new city would reset the drama in the house to zero.

The journey around the world to find love with Clayton begins MONDAY on #TheBachelor. ✈️🗺 pic.twitter.com/D0tmUPNOYv

Clarence, Clayton's good friend who lives in Houston and who played football with him, stopped by the hotel to visit him. Clayton was looking for advice from Clarence because he's married with a child and that's what he wants for his own life.

Taking a break from romance to focus on bromance 🤗 #TheBachelor @claytonechard pic.twitter.com/xuNR5DxL85

One-on-One Date with Rachel
A date card arrived and it read, "Rachel, Let's find our love in the heart of Texas." Rachel was thrilled to have a one-on-one! Rachel met up with Clayton in the woods and they did some serious kissing! Then, they walked up to some horses so they could do a trail ride. As they rode along they found a group of people who were having a barbeque. It was a bit weird for them to crash their party but the family was game to let them join. Rachel connected with the lone woman who was there and Clayton had a good time hanging with the guys. Clayton loved seeing how Rachel could just fit in with everyone.

Everyone has their own story to tell. ❤️ #TheBachelor pic.twitter.com/KmGmZQhjLC

Clayton asked Rachel what her last name was and made sure she knew his middle name. Those are good things to know of the person you are dating! Rachel kept whispering...and don't they know they're on TV? People need to hear this stuff! Clayton told Rachel that he was giving up playing hard to get, he didn't want to waste any more time. He made her promise not to be over him in a day. They seemed to make a very strong connection.

That evening, Rachel and Clayton went to a barn that was redone with a beautiful interior to have dinner. He said he was wondering how a woman as beautiful as she is with such a bad-ass job that is so kind is still single? She said that knew that she wanted to be a pilot her whole life since she was a child. Rachel says she has to prove herself every single day and her past relationship was not supportive of her career. She said she did not want a love that was conditional. Rachel wants to be married and a mom so badly, but does not want to give up being a pilot to do that. Clayton said that he admires her passion and would never ask her to stop doing what she loves. Rachel cried tears of joy and then Clayton took her to a private performance by Restless Road. They sang "Growing Old with You." It was a perfect song for them! Of course, Clayton gave her the date rose and said "I will never dim your light."

Second Group Date
The group date card read, "Sarah, Eliza, Teddi, Marlena, Jill, Susie, Mara, Sierra, Hunter, Lyndsey, Genevieve, Gabby, Shanae, meet me at the stadium." Before they left for the date, Shanae heard Sierra talking about her and rallying the troops against her. 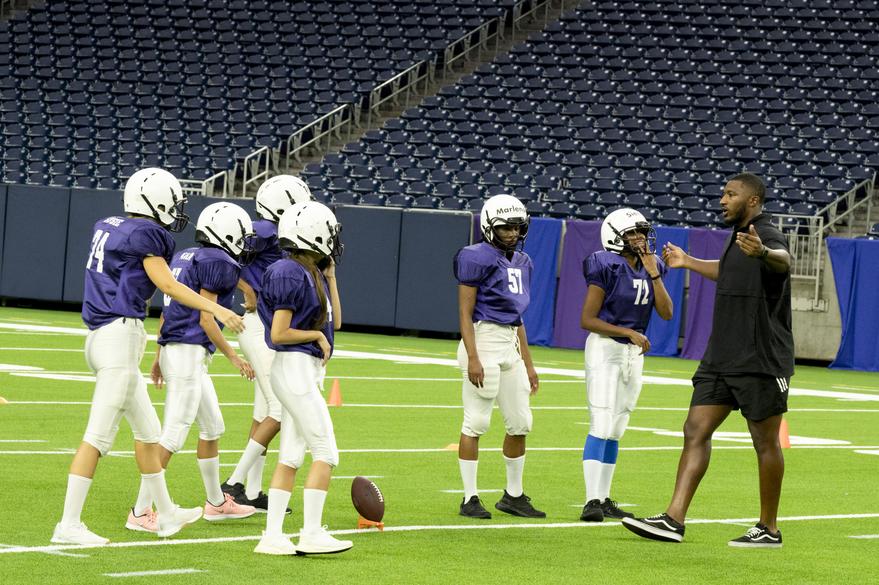 The ladies arrived at the Houston Texans football stadium to tailgate and as they had fun doing that, Jonathan Greenard and Kamu Grugier-Hill, both linebackers with the Texans, showed up. They were going to teach the women some football skills so they could take each other on for a game of tackle football. Yikes! The winning team would go to the after-party while the losers go back to the hotel. The blue team was the Shrimp Stampede and the purple team was the Purple Punishers. Since the purple team had the Olympian, you can figure out what happened. Shanae asked Clayton for a kiss when she fell down. Hannah Storm joined Jesse to do the play-by-play of "The Bachelor Bowl" and it was probably the best commentary we've ever had.

Shanae was sitting back at the hotel crying that her team lost. Teddi showed Clayton her scraped knee which he caressed. She shared about her parents' separation to Clayton and said it was a similar feeling of trying to gain his love compared to trying to gain her parents' love during that time. Clayton told her to keep being herself. Sierra decided to talk to Clayton about Shanae and he brought up the fact that he saw her tackle Shanae when she didn't even have the ball. Genevieve also brought up Shanae to Clayton and he found it draining.

Shanae showed up and said that she deserved to be at the after-party despite being on the losing team. She demanded to talk to Clayton and he was flabbergasted but said okay. The other women were shocked to learn that she showed up. He told her that he wanted to ask her some questions about what Sierra and Genevieve said. She played the victim to Clayton again and then used the rest of her time to make out with him at the bar. After that, Shanae walked back to the women and told them to "keep my *f-ing name out of your mouths." Then she picked up their trophy and threw it!

Next Week
Clayton and the women head to Niagara Falls. He continues to make a deep connection with Sarah, Rachel, and Gabby. Shanae continues to feud with the women but goes on a two-on-one date with Genevieve.