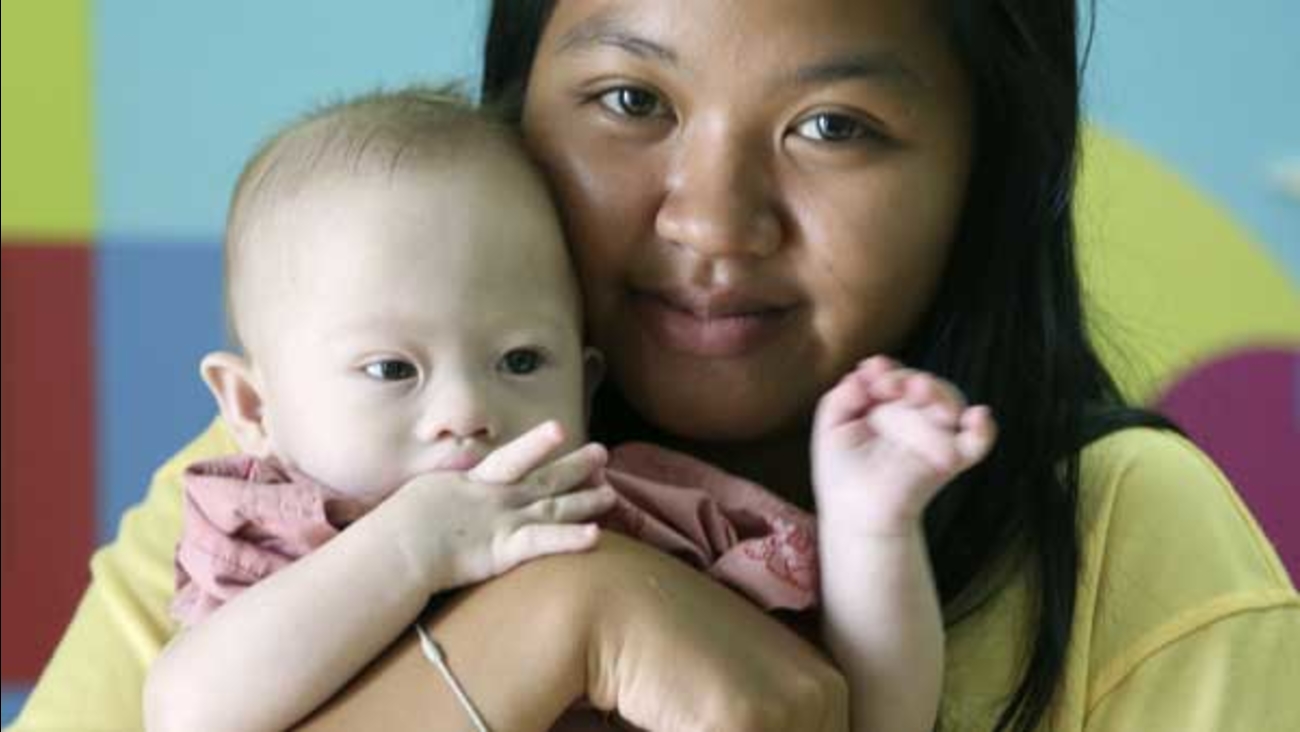 SRI RACHA, Thailand -- A Thai surrogate mother raising a Down syndrome baby she claims was abandoned by his Australian biological parents said Tuesday she would be happy to have the boy's healthy twin returned to her, especially after learning the father is a convicted sex offender.

The Australian government is considering policy changes due to the case, and Prime Minister Tony Abbott described it as "a tragic human situation."

Pattaramon Chanbua, a 21-year-old food vendor with two young children of her own, has been bringing up baby boy Gammy since he was born in December.

She claimed the parents rejected Gammy while taking his healthy twin sister home to Western Australia state. The Australian parents have not spoken publicly, though third parties disputed assertions that they heartlessly abandoned the afflicted baby.

"Personally, when I heard the news I was shocked but I can't say anything much right now," Pattaramon said at a press conference in her hometown, adding that she would "leave it to the law" to see if she can get the girl back.

Professor Jenni Millbank, a surrogacy law expert at Sydney's University of Technology, said Pattaramon could seek custody of the daughter through the Australian courts.

"She's a legal parent. If she turned up in the Family Court tomorrow, she could seek the return of that child, if that's what she wanted," Millbank told Nine Network television.

Surrogacy involves a woman carrying an implanted embryo in order to give birth, often because health issues prevent the biological mother from doing so. Legal doctrine on surrogacy is inconsistent, especially when different nationalities are involved. Countries such as India, Ukraine and Thailand have fairly lenient regulations and are popular for parents in developed countries looking for lower-cost surrogate mothers.

Pattaramon expressed sentimental attachment to the girl now in Australia, saying: "I want her back because she is my baby. She was in my womb." However, she said she was inclined to leave the resolution of the issue up to "fate."

"If she is happy, then I, as a mother, am also happy. I don't want to bring her back to suffer or anything. A mother would never want her child in trouble," she said. "But if she really cannot go on living there, then I'm very happy to have her back in my arms."

She said she will never hand over to the Australian couple 7-month-old Gammy, who has a congenital heart condition as well as Down syndrome: "Never. Not in any way."

The case had already caused a stir because of the allegation that the Australian couple did not take home both children.

Pattaramon has also said she did not receive the full payment she was promised through a broker for serving as a surrogate mother. The agency has declined requests for an interview from The Associated Press.

"This tragic situation has arisen as a result of a commercial surrogacy arrangement," Bishop told reporters. "We're looking at it from every angle."

But Prime Minister Tony Abbott said "there are no easy answers when it comes to government."

"For me, the one shining light to come from this most unfortunate, deeply regrettable situation is there appears to have been an absolute outpouring of generosity toward baby Gammy and his mother."

The Australian charity Hands Across the Water has raised more than $215,000 since July 22 to help the baby.

"That's the one thing I would like to say redeems this otherwise terribly, terribly unfortunate situation," Abbott said.