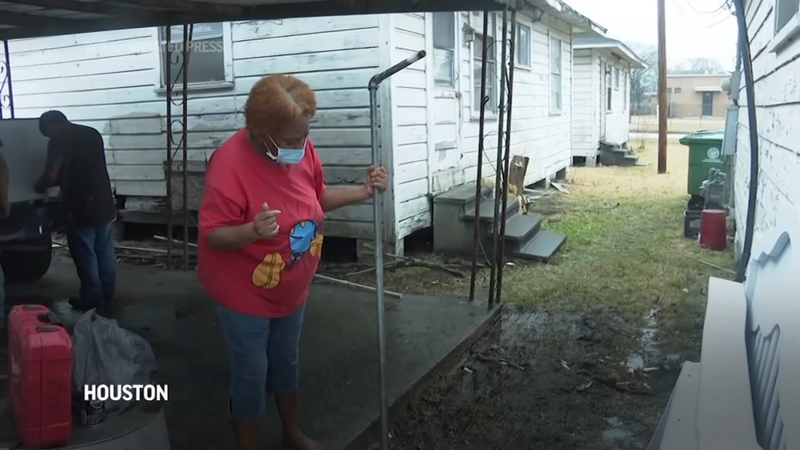 HOUSTON, Texas -- Ernest and Hester Collins already faced their share of hardships before last month's deadly winter storm plunged much of Texas into a deep freeze and knocked out power to millions of homes, including their modest rental in one of Houston's historically Black neighborhoods, Fifth Ward.

The brother and sister were getting by on a fixed income without a car when the storm left them and many neighbors without light or heat for days. The storm caused their pipes to burst, leaving some in the nation's fourth-largest city without running water three weeks and even longer because many couldn't afford repairs. Their dire circumstances left them unable to bathe and forced to use buckets as toilets.

The storm, which experts say may have caused billions of dollars in damage, is just the latest disaster in recent years to disproportionately affect Houston's communities of color and its poorest residents. These include major floods in 2015 and 2016, devastation from Hurricane Harvey in 2017 and, to a lesser degree, Tropical Storm Imelda two years later, a series of plant and refinery fires and explosions, and of course the coronavirus pandemic.

Not surprisingly, many in these communities are beyond frustrated by what they feel is a lack of assistance each time a disaster strikes.

"For some reason, we are not getting (help). They put us on the back burner," Ernest Collins, 56, said.

"Because we poor," a female neighbor added.

Ossie Riley had had her home since 1988. "To experience such a devastating tragic situation, it is very unbearable," she said.

Local officials, including Mayor Sylvester Turner, say they've focused recent recovery efforts on helping the underserved, but their work is far from complete. Community advocates worry that residents will continue having trouble accessing help and that this will exacerbate the ills afflicting their communities, including income inequality and a lack of health care.

Last month's storm caused blackouts in much of Texas and left more than 1.4 million Houston-area customers without power. The outages also forced millions of people in Texas and elsewhere, including Mississippi, to have to boil their water because treatment plants lost power. About 25% of all Houston water customers experienced some kind of leak from busted pipes. Of the 25 people killed by the storm in the Houston area, 17 were Black or Latino.

Robert Bullard, a professor of urban planning and environmental policy at Texas Southern University, said neighborhoods with predominantly Black and Latino populations, such as the Fifth Ward, have faced challenges from the start caused by residential segregation and racially discriminatory practices that denied such individuals mortgages and loans.

"This is life in a lot of those neighborhoods ... struggle, having to live on a modest income, just barely," Bullard said.

As she stood outside her home, Hester Collins, 67, said the helplessness of her situation fueled her depression. The only momentary solace she took was listening to R&B music coming from her neighbor's home.

"So, I just have to deal with what God blessed me to have," she said.

A block away, a group of friends who had informally formed a relief effort stood outside a U-Haul truck, giving away water and other supplies.

"It's just us as Texans taking care of one another," said Jacqueline Westman, who had previously lived in Houston but now resides in Austin and whose group raised thousands of dollars to pay for multiple supply giveaways in Fifth Ward.

About 6 miles (10 kilometers) to the northeast in another historically Black neighborhood, Trinity-Houston Gardens, running water was restored to Marie Johnson's home after she went nearly two weeks without it.

West Street Recovery, a nonprofit created after Hurricane Harvey to help fix flood-damaged homes, was working with plumbers to repair broken pipes for residents like Johnson, who can't afford to do so.

Johnson, 71, whose home was damaged during Harvey, said she was grateful for West Street's help as "the government doesn't do anything." The group was also fixing the plumbing in the adjacent homes of Johnson's two sisters and her niece.

Trinity-Houston Gardens and similar neighborhoods have also had to contend with pollution from industrial facilities and refineries, and a lack of flood mitigation. In 2019, state officials announced that a cancer cluster had been identified in Fifth Ward and a nearby predominantly Black and Latino neighborhood, Kashmere Gardens, and that it may be tied to a rail yard.

"We have to invest in extreme systematic changes that ... protect people from disaster as it comes and retroactively go back and help people care for the disaster that they've already endured," said Becky Selle, a co-founder of West Street Recovery.

Some residents who were still waiting to have their homes fixed after Harvey are now dealing with additional damage from last month's storm, said Keith Downey, president of the Kashmere Gardens Super Neighborhood, a community group that works with the city to set priorities and address local needs.

A city and county relief fund that has raised more than $11 million will offer repair help. But residents were also encouraged to apply for assistance from the Federal Emergency Management Agency. FEMA aid is limited, though, as the agency had awarded only $56 million in storm disaster assistance to the entire state of Texas as of Friday.

An analysis by Texas Housers, a nonprofit that works on housing issues, found that of individuals who had applied for FEMA assistance after Harvey, Black and Latino applicants were denied at higher rates than white applicants. The analysis also found that the poorer an applicant was, the more likely he or she would be denied FEMA assistance, said Zoe Middleton, Texas Housers' Southeast Texas co-director.

A FEMA spokesman, Alberto Pillot, said the agency wants "everyone who was affected by the winter storm to recover as quickly as possible."

And Houston's mayor said the city was doing everything it could to help residents and "stabilize the situation."

But not surprisingly after the repeated disappointments of past recovery efforts, some of Houston's Black and Latino residents remain skeptical.

"In recent memory, there is nothing that tells (residents) the system will work for them," said Huey German-Wilson, president of Trinity-Houston Gardens Super Neighborhood.

German-Wilson said that despite being exhausted and at times disheartened by the efforts to get her neighbors help, she will push forward.

"We continue to work with our communities to say, 'No we're not going to be overwhelmed and we're not going to give in to this.'"
Report a correction or typo
Related topics:
houstonpovertywinter stormtexas newsfinancefreeze
Copyright © 2021 by The Associated Press. All Rights Reserved.
TOP STORIES
Fauci warns 'things are going to get worse' with COVID
Splashtown season pass holders seek refunds to no avail
Innocent woman and wrong-way driver killed, 2 hurt in I-45 crash
Woman shoots boyfriend to death after domestic assault, deputies say
Woman killed in North Houston hit-and-run crash
'Confederate Drive' in Missouri City will soon have a new name
24K gold tequila bottle sells for $300
Show More
Weak cool front brings in scattered storms Monday
Siblings use AAU Junior Olympics as prep for the real deal
1 shot after argument at club in N. Harris County, HPD said
Pearland PD vehicle involved in crash while responding to call
Innocent driver killed in Southwest Freeway crash with DWI suspect
More TOP STORIES News