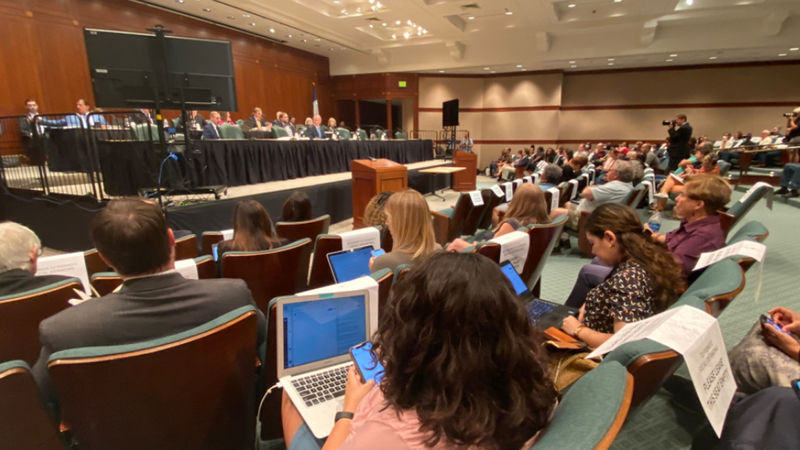 AUSTIN, Texas (KTRK) -- Texas lawmakers are back at work in Austin in special session as dozens of people filled the halls of the Texas State Capitol to give their opinion on a variety of proposals, including voting and election practices.

Bus loads of people from southeast Texas were among the crowd as they waited to testify at a Saturday committee hearing on the issue, according to ABC13's Nick Natario. Natario traveled to Austin over the weekend to track the action taken by both chambers.

The first testimony on the Texas election integrity bill for the special session has started. The auditorium is packed, with even more outside. S.B. 1 testimony is limited to 2 minutes. This should last hours. #txlegehttps://t.co/3P7HVPQVrX pic.twitter.com/Q0btELfg36

House and Senate Republicans have already submitted their proposals, including a ban on drive-thru and 24-hour voting. On Friday, Democrats introduced their own version of a bill that call for automatic voter registration for anyone who obtains a Texas driver's license. Their proposal also includes a provision allowing voters to register online.

Previously, legislation addressing voting failed to meet a critical deadline in May when House Democrats staged a walkout to break quorum and prevented a final vote on the sweeping election bill, Senate Bill 7. Going into the 30-day special session, Democrats did not rule out the possibility of another walkout to block new restrictions on voting.

During a press conference Thursday, Texas state Rep. Armando Walle said "every option is on the table" for Democrats to mobilize against the GOP-backed special session agenda, which includes a host of items that echo emerging national culture wars. Walle added that his fellow party members are "going to use every parliamentary means to stop these bills," but did not follow up with examples of any potential actions.

Democrats are also decrying the Republican policy push of "election integrity" as a political maneuver that creates a solution when they say there is no existing problem.

The language included in each of the new bills -- House Bill 3 and Senate Bill 1 -- is likely to change as the proposals advance through the legislative process, but the objectives laid out in both pieces of legislation largely echo the contentious restrictions first introduced in S.B. 7.

"H.B. 3 is just like S.B. 7 -- it's based on a lie. It's based on a lie that there's rampant fraud in our elections, and on the 'big lie' that Donald Trump actually won the last election. All across the country, you see Republicans clamoring to pass these anti-voter bills, so they can curry favor with Donald Trump and his supporters," state Rep. Chris Turner, who also chairs the Texas House Democratic Caucus, said Thursday.

Like their predecessors, both H.B. 3 and S.B. 1 include several elements that voting rights activists oppose. Among them are provisions that appear to be aimed at practices utilized by Democrat-leaning Harris County during the 2020 election. Both bills ban 24-hour voting availability, which offered greater ballot access to Houston-area shift workers when implemented in the fall. Each of the proposals also aims to end drive-thru voting, another popular voting method in the diverse county.

According to S.B. 1, "a polling place may not be located in a tent or similar temporary moveable structure or in a facility primarily designed for motor vehicles." Meanwhile, H.B. 3 states that polling places "shall be located inside a building. No voter may cast a vote from inside a motor vehicle," unless the voter has physical disabilities that warrant special accommodations.

Another contentious carryover element from S.B. 7 included in the new legislative proposals is granting expanded access to partisan poll watchers. Voting rights advocates previously blasted the concept and said the provisions could allow poll watchers to intimidate voters, especially those who are people of color.

Although the current language in S.B. 1 and H.B. 3 continues to grant poll watchers the ability to move freely around polling places, there appears to be an attempt by the bills' authors to provide some oversight to their behavior.

"Before accepting a watcher, the officer presented with a watcher's certificate of appointment shall require the watcher to take the following oath, administered by the officer: 'I swear (or affirm) that I will not disrupt the voting process or harass voters in the discharge of my duties,'" S.B. 1 says.

The bill goes on to outline a provision that allows watchers to file complaints if they believe they were "unlawfully prevented or obstructed from the performance of the watcher's duties."

Meanwhile, H.B. 3 includes language Democrats backed in May that allows election officials to "call a law enforcement officer to request that a poll watcher be removed if the poll watcher commits a breach of the peace or a violation of law."

Notably, neither version of the new bills include restrictions on Sunday voting hours, which voting activists previously saw as an attack on "Souls to the Polls" events in Black communities. The bills also do not include language from S.B. 7 that lowered the threshold of proof required to challenge and potentially overturn election results.