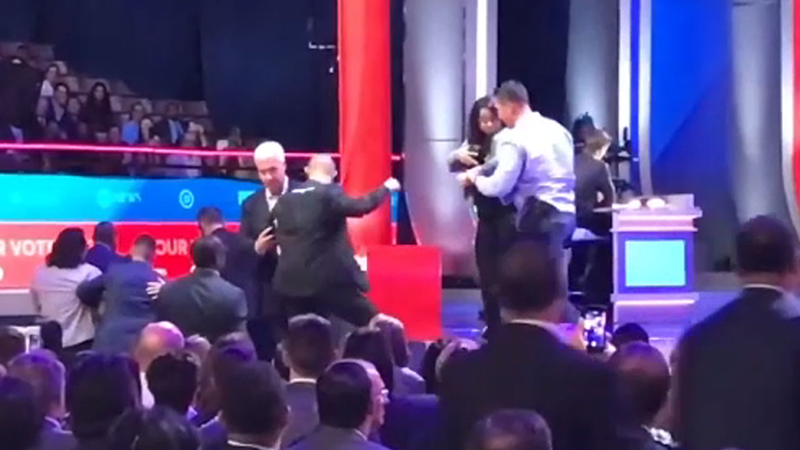 HOUSTON, Texas (KTRK) -- A group of protesters were ushered out of the debate hall Thursday night after making it to the stage as former Vice President Joe Biden was answering a question about resilience.

The discordant sound of shouting erupted near the end of the ABC News Democratic debate at Texas Southern University in Houston.

New video taken by ABC13 reporter Nick Natario inside the hall shows security whisking away four people who made it up the steps to the stage.

The demonstrators continued shouting as they were taken outside of TSU's H&PE Arena.

The protesters' message was not immediately known, and we do not know whether they were affiliated with any of the Democratic campaigns.

Groups from the right and left made their presence known across Houston Thursday, from a Greenpeace USA protest that shut down the Fred Hartman Bridge in Baytown to a father and four sons who played songs with lyrics targeting Democrats on the TSU campus.

Multiple protests to happen on both sides at Thursday's debate

"Trump is going to thump them, no pray of winning the south," said Randall Terry II, a protestor.

"We're here to say no to Democrat candidates, to encourage people to abandon the Democratic party," Terry said. "They've become so left-wing, so pro-abortion, so pro-socialism, they've lost their minds."

Groups spanning almost every ideology plan to be outside TSU.

Did you see this? #YangGang supporters tried to climb the stage yelling their puppet. Quickly ushered out by security. #abc13 #abc13demdebate pic.twitter.com/k39LT0FC0x

Daniel Cohen is with the Don't Look Away HOU coalition. They want the government to defund and eventually abolish immigration and customs enforcement.

Cohen says that hundreds have signed up to march from UH to TSU this evening.

'This is an opportunity to get a lot of people listening to what we're talking about," Cohen said.