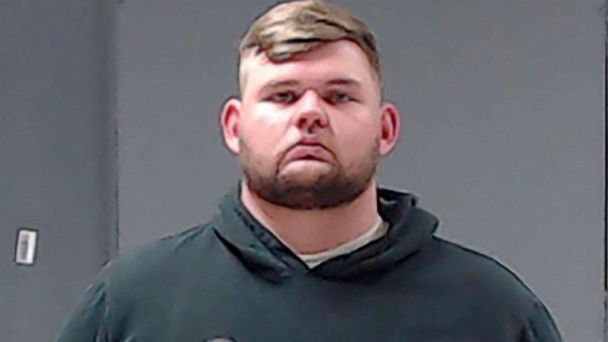 A police officer who faces murder charges in the shooting death of a Black man in East Texas has been fired, authorities said.

Wolfe City police officer Shaun Lucas was arrested Monday after he shot and killed 31-year-old Jonathan Price over the weekend at a gas station. Following an administrative investigation conducted by the city, Lucas was fired Thursday "for his egregious violation of the City's and police department's policies," Wolfe City officials said in a statement.


The mayor and city council also said they joined the community in mourning.

"Wolfe City is a tight-knit community, and we join you in mourning Jonathan's death and the events of last week," the statement said.

Lucas, 22, responded to a domestic dispute call at the gas station's convenience store around 8:24 p.m. Saturday, according to police. Price's family says Price, a Wolfe City employee, was attempting to break up the dispute and didn't threaten anyone.

According to Lucas' arrest affidavit, bodycam footage showed that when Lucas arrived at the scene, Price greeted him and asked multiple times, "You doing good?" while extending his hand in a handshake gesture.

Lucas, who is white, told investigators that he thought that Price was intoxicated and attempted to detain Price, but Price allegedly stated, "I can't be detained." The officer then tried to detain Price by grabbing his arm and using verbal commands, but when that was unsuccessful he then produced his Taser, warning Price to comply.

When Price walked away, the officer fired the Taser. While being tased, Price walked toward Lucas and tried to reach for the weapon, at which point the officer took out his service weapon and fired four times, according to the affidavit.


Price died later that night at the hospital.

The affidavit concluded that the officer "did then and there intentionally and knowingly cause the death of Price by discharging a firearm."

Lucas was arrested Monday night on murder charges and held on $1 million bond.

In a statement on Saturday's shooting, Rogers said, "Officer Lucas only discharged his weapon in accordance with Texas law when he was confronted with an aggressive assailant who was attempting to take his Taser."

"As the Mayor and Council of Wolfe City, we want to extend our gratitude that the gatherings in support of Mr. Price have remained peaceful," city officials said of protests that have occurred this week. "We also ask that you remember our City employees, many of whom worked with both Mr. Price and Mr. Lucas as we eventually begin the work of healing our town and the community at large."
Report a correction or typo
Related topics:
abc newsnational
Copyright © 2021 ABC News Internet Ventures.
TOP STORIES
Body matching description of Gabby Petito found in Grand Teton: FBI
10-year-old injured in shooting in N. Harris Co., deputies say
2 injured after ejecting from Navy jet near Fort Worth before crash
Pasadena mom survives birth scare after fire displaces her family
Man accused of shooting girlfriend to death charged with murder
Attorney explains why US flying Haitians to home country is a problem
Doctor says he violated Texas' restrictive antiabortion law
Show More
Mayfield shakes off injury to lead Browns past Texans 31-21
US closes part of Texas border, begins flying Haitians home
2 shot outside N. Houston nightclub as police arrive for fight call
2 killed, 1 hurt in NW Houston crash involving tow truck
Passenger killed in crash with DUI suspect in SW Houston
More TOP STORIES News