Hundreds of migrants dropped off in Texas day after Christmas 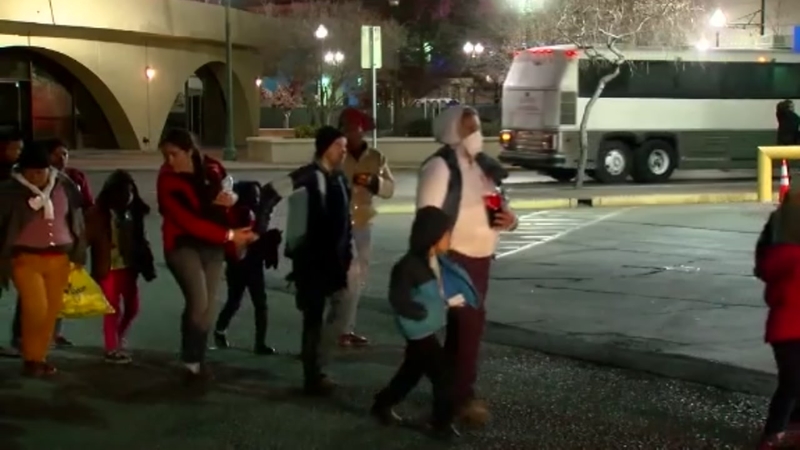 Hundreds of migrants dropped off in Texas day after Christmas

EL PASO, Texas -- Hundreds of migrants were dropped off in Texas a day after Christmas.

Nearly 500 more migrants were released from ICE custody in Texas Wednesday. This happened after nearly 600 were dropped off in downtown El Paso over the last few days.

According to Garcia, ICE releases about 2,000 migrants a week. He says he communicates with ICE before the release, telling them where the migrants will be taken.

Garcia believes a recent change of ICE policy may be to blame.

"If NGO's that are able and willing to receive refugees cannot receive the numbers that ICE needs to release, they would release them to the street," Garcia said.

Garcia said that CBP and ICE facilities are not built to care for families, and need to be updated.

"If I was a border patrol officer, I would be pulling my hair out trying to figure out "How do I do this?' Because the facilities do not lend themselves to what the immigration flow reality is," he explained.
Report a correction or typo
Related topics:
el pasoshelterchristmasu.s. & worldice
TOP STORIES
Boyfriend accused of shooting 15-year-old girl 22 times posts bond
Scattered storms ahead of Wednesday night cold front
Pearland and Friendswood drainage projects continue in 2022
Texas AG Ken Paxton, who has fought vaccine mandates, contracts COVID
TX college students confront anxiety, as 5th pandemic semester begins
27-year-old accused of killing 19-year-old in Whataburger parking lot
Starbucks no longer requiring US workers to be vaccinated
Show More
Baytown detective followed onto Highway 146 and shot at by 3 men
Missing 14-year-old girl didn't come home from school, deputies say
French actor Gaspard Ulliel dies after ski accident
Biden, 1 year in, says nation weary from COVID but in a better place
Teen dies after being shot while walking along Sims Bayou
More TOP STORIES News