By Allyson Waller, The Texas Tribune 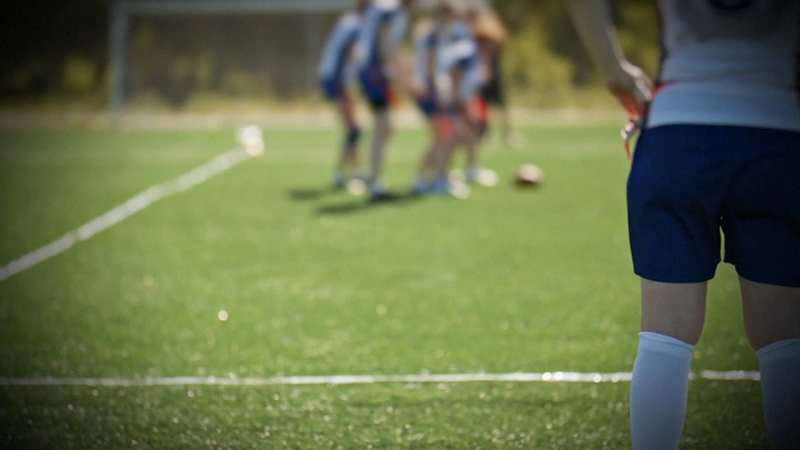 Julia wouldn't describe herself as the "biggest sports person" in the world. She's not into basketball or football. She played soccer when she was little, but it didn't stick as she got older.

What she's really into are sports like cross country and track, which she feels are smaller in scale and more intimate. She trained with her dad, who used to run track in high school, and soon discovered she had a knack for it.

"He taught me the form and how to run, and I just fell in love with running hurdles because I was good at it, but also, it just gave me a feeling that you don't really feel in a lot of other situations," she said. "It feels like putting life on pause for 20 seconds or so .... you only focus on what you're doing and how to do it right."

It's this feeling Julia chases when she practices - but as a transgender athlete, she hasn't been able to pursue it in competition. Because of statewide rules, she's essentially barred from competing against other girls.

Last year, the Texas Legislature passed House Bill 25, which requires that student athletes play on sports teams that correspond to the sex listed on their birth certificate, and the certificate athletes present must have been issued near the time of birth. The law went into effect Tuesday, making Texas the 10th state in the U.S. to enact similar legislation.

Supporters of the law argue it is necessary to protect women's sports from what they deem unfair competition. State Rep. Valoree Swanson, R-Spring, said one of her main reasons for authoring the bill was to "protect girls' safety." She did not respond to requests for comment for this story, but in a news conference Tuesday, she hinted at introducing future legislation that would expand sports team restrictions to the college level.

"We have got to come back and protect our college girls in the next session," she said.

HB 25 targets transgender youth, a rather small slice of the state's population. Data shows less than half of LGBTQ youth participate in sports, and it's predicted the number of transgender youth is even smaller.

Nevertheless, legislation targeting trans people has been a prominent part of the Texas GOP's agenda in recent years. Lt. Gov. Dan Patrick said Tuesday that he was "especially proud" of the law.

"In Texas, we refuse to deny any woman or girl athlete the right to compete on a level playing field, and to be the best in their sport," Patrick wrote on Twitter.

LGBTQ advocates say there's been little evidence in the state of Texas to support the argument that transgender girls would displace cisgender girls on sports teams.

The transgender sports bill was part of a litany of anti-trans legislation introduced last year during Texas' four legislative sessions that pushed some LGBTQ families to question their residency in the state and has led to detrimental mental health effects on LGBTQ youth, said Ricardo Martinez, executive director of Equality Texas, a statewide advocacy organization for LGBTQ Texans.

"Lawmakers have willingly ignored the overwhelming harm that this bill and bills like it has already caused in favor of exploiting our differences and the lack of familiarity that some people may have about transgender people," Martinez said. "This we know stokes fear, and it divides us."

Advocates for transgender youth say they are bracing for the impact of the law's implementation and the heightened scrutiny of transgender youth and their bodies. School districts have said they will abide by the law, but it's still unclear how that will look in practice and how schools will determine whether a student's birth certificate was issued near the time of birth.

Julia, 16, said she's been able to practice with the girls team at her school during track season, but she doesn't compete in meets. For her, the law means she has to face a "harsh truth" - competing in a sport she loves is something she just won't be able to do.

"I wish I had that sort of idea in my head that this practice would all lead to something," she said. "Now after actually realizing that this law is being put into place ... all the practice that I'm going to be doing is going to lead up to nothing because I don't have anywhere to show it off or anywhere to compete."

Although some Republican lawmakers have said the new law codifies existing rules from the University Interscholastic League, the athletic governing body for public schools in Texas, the law goes further than previous UIL rules. UIL used to allow students to submit legally modified birth certificates, which students may have changed to align with their gender identity.

UIL introduced a rule in 2016 establishing that an athlete's gender would be officially determined by their birth certificate. Under the new law, a modified birth certificate would only be accepted if it was changed to correct a clerical error.

Julia, who's in the process of getting her gender marker changed on her birth certificate, said she had been optimistic that a new birth certificate would allow her to compete with other girls.

Jamey Harrison, deputy director of UIL, said school districts will be responsible for ensuring they are in compliance with the law, but it's not completely clear whether they will be able to determine if a birth certificate is original.

"It's new ground, so some of it will be learning as we go," Harrison said in an interview with The Texas Tribune. "But UIL does not have an investigative arm outside of its member school committees. We don't have a bunch of black Suburbans and earpieces and guys going around checking birth certificates, that's not the way it works. At the end of the day, the schools are going to have to do the best they can to make sure they're in compliance with the law."

Harrison said if districts don't comply with the law, they will be subject to certain sanctions and will have to forfeit competition at a minimum.

The Tribune contacted some of the state's largest school districts in major metro and surrounding areas to ask them about their plans to comply with the law. Several school districts did not respond to requests for comment, and a handful declined to be interviewed.

Deanne Hullender, a spokesperson with the Hurst-Euless-Bedford Independent School District, said it "will definitely be following all UIL guidelines and policies provided within this new legislation." Meghan Cone, a spokesperson for Frisco ISD, said operations in her district are not expected to change because the bill "primarily codifies existing UIL regulation."

Enforcement of laws similar to HB 25 have been halted in states like Idaho and West Virginia as litigation battles over the statutes play out in court. A lawsuit in Tennessee is also challenging that state's version of the law.

"If you're going to treat one set of students differently than another, then you're looking, at least in this case, (at) a violation of equal protection, but it's also sex discrimination," Skeen said.

According to the U.S. Department of Education, current interpretation of Title IX - a federal civil rights law that prohibits discrimination based on the basis of sex in education - also encompasses gender identity and sexual orientation protections.

Andrea Segovia, senior policy and field strategist with the Transgender Education Network of Texas, said her organization is focusing on supporting transgender students as the law takes effect by making sure they are connected to mental health resources and helping educators find the best ways to be allies to LGBTQ youth.

"Unfortunately, we are at a point where it's like a little bit of wait and see," Segovia said about the law's enforcement. "Because we know that UIL affects all public schools, but just like any other law in this state, it really depends on how they enforce it."

According to the Trevor Project, a national suicide prevention and crisis intervention organization for LGBTQ youth, about 1 in 3 LGBTQ youths report participating in sports. Transgender youth are less likely to compete compared with their lesbian, gay and bisexual peers, said Casey Pick, Trevor Project's senior fellow for advocacy and government affairs.

"Many of these youth tell us that they didn't participate in sports because of fear of harassment discrimination, so that is a reality," Pick said. "But some of the youth who do participate tell us that it is their one source of relaxation, their place to find camaraderie and teamwork, that they have a lot of fun and sometimes it's the place they feel best about their bodies and who they are."

Another worry among opponents of the Texas law is the effect it could have on cisgender women who don't subscribe to traditional interpretations of what a young girl or woman should look like.

Lis Riley, whose child is a cisgender girl who plays basketball in Austin ISD, said her daughter used to present herself as masculine before but has started to lean back into a feminine identity so she's not targeted while participating in sports.

"'I need to kind of look like a girl so people don't look at me weird when I'm trying out for the girls basketball team,' essentially is kind of what she's telling me, which is kind of sad to feel like that's the world of high school sports in a public school," Riley said.

Meanwhile, student athletes like Julia are left with virtually no choices if they want to compete.

During the offseason, Julia said she's been practicing by running around her neighborhood and sometimes going to her school's track. Her coaches have applauded her talent, she said, but she's made it clear to them that the only team she feels comfortable being a part of and competing with is the girls track team.

"I don't see it as a 'me' problem. I see it as other people's problem," she said of the Texas law. "I kind of accepted that I'm not gonna be able to (compete). I kind of just deal with it. I mean, it sucks, but that's kind of the harsh reality."