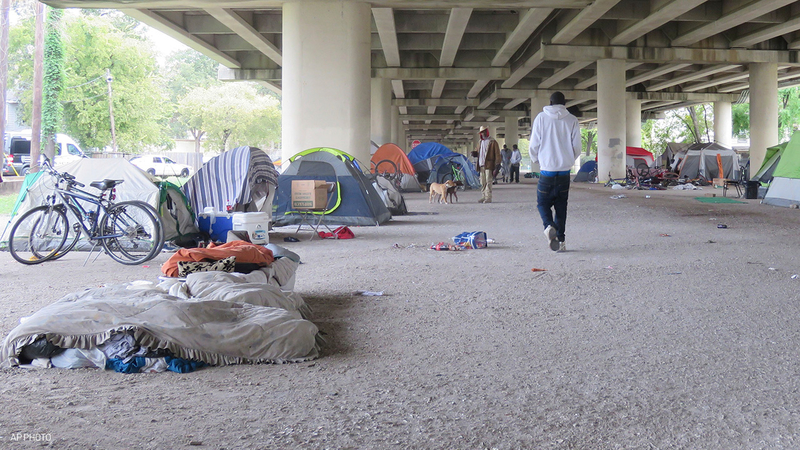 Mayor Turner lays out plan to help homeless during pandemic

During his daily briefing, Turner reported 61 new COVID-19 cases in the city, bringing the total to 3,419.

The briefing was held at the Fonde Community Center in downtown Houston, which has been turned into a shelter for the homeless in need during the pandemic.

Turner said the majority of Houston's homeless suffer with chronic illnesses, which makes them more at-risk for contracting coronavirus. With the help of a special team, including special assistant to the mayor for homeless initiatives Marc Eichenbaum, the city has created a "3-prong response" effort centered around three key areas to help the homeless: prevention, emergency response and recovery.

"When we look at homelessness, the impact on the homeless community by COVID-19 is kind of like a tsunami that has not hit landfall yet," said Eichenbaum. "There are hundreds of homeless Houstonians that haven't been housed in the past two months because we've been focusing on the emergency response to COVID."

"This is just the beginning for our homeless," said Mayor Turner. "Like all undeserved communities, they are not forgotten."

The mayor said 10 area outreach teams have been tasked to hand out vital information on COVID-19 and supplies to the homeless while screening them for symptoms at the same time. With the help of Harris County and the Downtown Management District, the city has been able to install 20 hand washing stations in areas with a high homeless population. They were also able to hand out 8,800 face masks, 65 bottles of hand sanitizer, and 15,000 antiseptic wipes.

When it comes to the emergency response aspect of his plan, Turner addressed a question that he says has been asked frequently: How does a homeless person get tested if they are symptomatic?

With the help of Healthcare for the Homeless Houston, homeless agencies, shelters, and other outreach teams can call a designated homeless testing hotline where they can easily set up a free ride to a homeless testing site.

Turner said if a homeless person tests positive and needs a place to isolate, the city and county have teamed up to create a quarantine facility with food and health care. The facility has a capacity to hold 126 people and has the capability to add 60 more rooms if required. The facility's location was not released.

"This is just the beginning for our homeless," said Turner. "Like all underserved communities, they are not forgotten."

Meanwhile, minutes after Gov. Greg Abbott announced new steps in his plan to slowly reopen Texas on Monday, Turner reminded Houstonians that the virus "is still out there."

Abbott said the executive 'stay-at-home' order will be allowed to expire as scheduled this Thursday and said restaurants, movie theaters, malls and other businesses will be allowed to open the following day.
READ MORE: Gov. Abbott announces next steps today to reopen Texas
"Let me just say that it is my hope that with the measures that are being put in place that our numbers will not spike," said Turner on Monday. "That is my hope. I fully understand the need to reopen the economy. It's my hope that the 'opening up' he is proposing will work. We also want to make sure our health care needs are not hurt at the same time."

Turner has emphasized the importance of keeping the homeless population safe during the pandemic in the past. On April 15, Turner introduced a new initiative to help homeless shelters across the city improve social distancing.