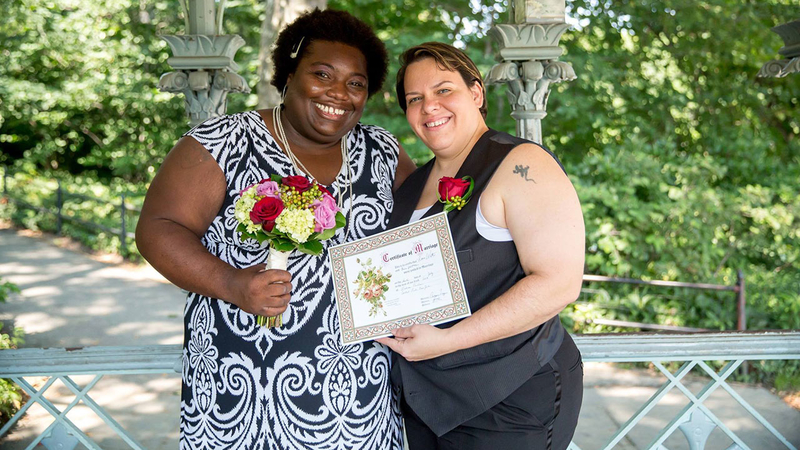 NEW ORLEANS, LA (KTRK) -- When Kim and Fran Watson got married in their Houston church five years ago, they knew it wasn't legally binding. That all changed last year, when the couple traveled to New York City and legally tied the knot in Central Park.

"Getting there and picking up that certificate was a totally different experience because it was very emotional, it was very much, wow!!" Said Kim, who met Fran years ago in college. "No one can argue with me any more about this, we're married."

The couple's only real disappointment is that their marriage isn't recognized in Texas. Could that change? It depends on what happens this week in Louisiana. The issue of whether a ban on gay marriage is Constitutional will be heard in front of the 5th Circuit Court of Appeals this week.

South Texas College of Law professor Josh Blackman says there's no guarantee on how the court will rule.

"It's really hard to say, you're grasping at straws," said Blackman, "but I will say the pattern has been every court to address this have found the laws to be unconstitutional, for whatever that's worth."

Ahead of that appeal, the New York based Freedom to Marry advocacy group ran a television ad featuring a gay Fort Worth police officer and several supportive coworkers.

In the ad, the officer says: "My partner Justin and I, we live together, eventually we would like to get married like everyone else."

"They're trying to put New York, California values over Texas," said Woodfill, who is also running for the state wide Republican Party Chair. "Texans overwhelmingly rejected those values and say here in our state, marriage is a relationship between one man and one woman."

The ad didn't seem to draw much attention locally, even the Watsons say didn't see the ad, and were surprised by it when asked by Eyewitness News. However, they say this is not about Texas wanting to be New York or California, they say it is simply their right to marry whom they choose.

"I'm hoping the Appellate Court will rule in favor of marriage, and have marriage equality here in Texas," says Fran Watson.

Same-sex marriage isn't the only hot button topic in an appeals court right now; there's the huge decision on who can and cannot provide abortions in Texas. A number of clinics were required to stop giving abortions because they did not meet hospital-level operating standards. These providers received a reprieve from the U.S. Supreme Court. On Wednesday, the federal appeals court will hear arguments on this case as well.

Once arguments are heard, it's not clear how long it may take to come to a decision. Whatever it may be, it will have a sweeping impact on two very big issues in Texas.
Related topics:
abortiontexas newsgay marriage
Copyright © 2022 KTRK-TV. All Rights Reserved.
TOP STORIES
50 migrants die after 18-wheeler abandoned in Texas heat
Woman accused of killing her sister and dumping her body in custody
Gulf disturbance up to a 30% chance of development
Grandmother of Uvalde school shooter released from hospital
Juvenile allegedly sexually abused therapist, could be tried as adult
2 states battle abortion trigger laws; pharmacies limit Plan B sales
More heavy rain possible late this week
Show More
Search for man and woman in gold SUV connected to deadly shooting
Boy Scouts jump into action after Missouri Amtrak train derailment
Daily Harvest responds after customers sickened, hospitalized
Actress Mary Mara dies at 61 after drowning in river: police
Nazi convicted: Former SS guard, 101, jailed for aiding murder
More TOP STORIES News