'He has failed in his commitment to the people,' Texas lawmakers call out Cruz for vacationing in midst of winter storm 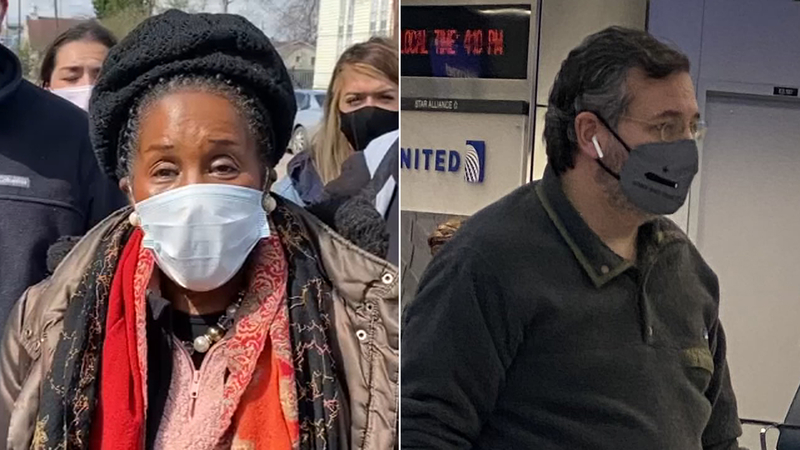 TX lawmakers call out Cruz for vacationing during winter storm

Texas lawmakers are speaking out after Republican Sen. Ted Cruz sparked conversations after he was seen at an airport ready for a vacation destination in the midst of an energy and water crisis in the Lone Star State.

Among the lawmakers is Democratic Houston Rep. Sheila Jackson Lee, who was at a water distribution site on Thursday and said, "I do think in a time of crisis the place and the only place I want to be is with the people I represent," when asked about Cruz's trip to Mexico.

"I'm present and accounted for," said Congresswoman @JacksonLeeTX18 when asked about #TedCruz & his trip to Mexico. "I do think in time of crisis the place & the only place I want to be is with the people I represent." She is in Houston at a water distribution site. #abc13 pic.twitter.com/AGQuZCB8fu

ABC13 spoke with Gilberto Hinojosa, the chair of the Texas Democratic Party, who called for Cruz's resignation.

"I would tell [Cruz] that it's time that he resigned. That in every sense of the word he has failed to act as a United States senator for this great state of Texas, that is that he has failed in his commitment to the people of Texas," Hinojosa said. "And yet, this man knowing the condition that Texans are suffering under goes to Cancun, a resort in Mexico, and vacations there, while his citizens in the state, where he is the highest elected official, go through this terrible tragedy, and disaster."

During a news briefing on Thursday, Houston Mayor Sylvester Turner took a small jab at Cruz and stated, "My job is to stay here until the situation is resolved."

"So that's it, you know, I'm going to let the Senator [Ted Cruz] speak for the senator. What I will say to you in my five-plus years as mayor is that I've had plenty of practice, dealing with the situation," Turner said.

On Thursday, Cruz said his family lost heat and power, a similar fate that millions of his fellow Texans have endured since Monday.

In a statement, he said he flew with his daughters who asked to take a trip with friends, assuring he was on his way back to Texas Thursday afternoon.

"Wanting to be a good dad, I flew down with them last night and am flying back this afternoon. My staff and I are in constant communication with state and local leaders to get to the bottom of what happened in Texas. We want our power back, our water on, and our homes warm. My team and I will continue using all our resources to keep Texans informed and safe," Cruz said.

The Houston Police Department confirmed a member of the senator's staff contacted the department at Bush Intercontinental Airport on Wednesday to request assistance for Cruz's arrival.

On Thursday, Houston Police Chief Art Acevedo tweeted that the department was "not aware of any request from Senator Cruz's staff for assistance regarding his return."

While we are not aware of any request from Senator Cruz’s staff for assistance regarding his return, his arrival will more than likely turn into a media circus, so @houstonpolice will be monitoring the situation. https://t.co/ERAVPoM79D

During a briefing about the ongoing outage situation, Gov. Greg Abbott was asked to comment on Cruz's trip to Mexico, as he replied with, "I haven't been following with people's vacation plans ... we've been working."